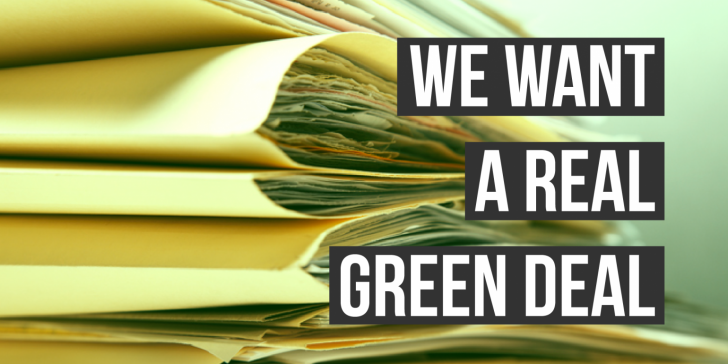 There will be no more standing in line awaiting concerted action.

Since Europe’s Green Deal was articulated — long before Ursula von der Leyen took office incidentally — the European Commission has been working tirelessly on a regulatory framework to literally energise and realise the promise of a climate-neutral continent. Addressing this long-standing challenge includes a growing recognition that the global governance model (the COP system) has failed to deliver on climate change.

The Green Deal is a game changer. Its new, far-reaching agenda should deliver nothing less than an overhaul of the economy in order to achieve climate neutrality. And, in keeping with von der Leyen’s personal brand of “walking the talk,” the Commission means business rather than merely articulating visions. Aspirational principles have now been actualised in terms of specific objectives, timetables and milestones.

Tactically, the Commission will use regulations rather than directives to expedite implementation, whenever possible. Unlike directives, regulations don’t need to be transposed into national law and are immediately binding for all member states. Just a few examples — the roadmap touches on agriculture, hydrogen, building renovation, methane pollution, and thecircular economy.

Some of the plans are already law-ready and what’s missing is implementation. A case in point is the Taxonomy Regulation, which was adopted by the Commission on 18 June 2020 and entered into force on 12 July 2020. The taxonomy is a unified classification system for “green” and “sustainable” investments under the EU’s sustainable finance package. Together with the EU ESG (Environment Social and Governance) initiatives, these measures ensure that only genuinely sustainable investment is supported, putting an end to the rhetorical “greenwashing” of regular economic activity. The hope is that this regulation will have a global impact. Similar provisions have been adopted by China.

To discuss the impact of the new work programme, Brussels Morning sat down with German pharmacist turned politician Jutta Paulus.,MEP. Paulus has been a member of the Alliance 90/The Greens since 2019, a party with increasing electoral and political influence in Germany, current holders of the Council Presidency, and one of the historical political forces behind Europe’s environmental agenda. ,

In a recent debate on EU China relations, Paulus claimed that “while it is true that we are experiencing a fundamental shift, however, had there not been the Fridays for Future and so many youths taking to the streets for climate, neither von der Leyen nor Angela Merkel would have been taking such bold steps in Brussels and Berlin.”

No time for gradualism

While it’s true that devastating fires, drought, water crises, and falling agricultural productivity have raised public awareness globally, pushing politicians, especially in Europe, to act, other factors could be at play too. For the first time in the history of climate negotiations, two of the major economic blocs, the EU and China, almost at the same time, have taken up climate and environmental commitments independently of each other.

As the Director General of DG Clima, Mauro Petriccione argues, there is qualitative change in the nature and the method of EU policy- making. The EU is now leaving behind its traditional policy gradualism of incremental improvements, to embrace a new form of “visionary realism”. The Green Deal, Petriccione continued, provides a long-term perspective (2050) for net-zero combined with its more traditional small steps method which was based on a ten-year timeline (2030).

Historically, EU actions have been based on a balanced mix of voluntary initiatives and regulatory actions that combine “bottom up” and “top down” approaches. That is, in essence, the methodology and the distinctive “brand” of the European environmental governance. Confronted as we are with a real life deadline – the existential threat of climate change – gradualism doesn’t work anymore.

In parallel, China’s determination to achieve a green transformation of the economy is based on top down methods of environmental governance open to innovation. Evidence of this is the systematic wave of campaigns carried out by enforcement officials with the help of emerging technologies and big data analytics. Enforcement, as seen in China’s handling of the Covid19 crisis, comes in a form that would not be possible in Europe.

The Chinese model gives rise to new forms of government-business partnerships (Kostka and Zhang, 2018). A broad concept of ‘’Circular values’’ is becoming commonplace in both China and the EU, paving the way towards smarter, healthier and safer patterns of green consumption.

Confronted with the success of the Chinese model of governance, some wonder whether liberal democracies are sufficiently equipped to tackle existential crises, be it Covid19 or climate change. Slower and “less efficient” decision-making processes, the claim goes, weakens how democracies react to threats. “Quite the opposite is true”, Jutta Paulus told Brussels Morning on Wednesday. “I am personally convinced of the superiority of democracies and I am staunch believer that free individuals are responsible citizens that can drive good governance and most needed change”.

If in the wake of the much-debated Brexit vote, David Van Reybrouck of  The Guardian wrote that elections are bad for democracy.  Paulus believes that the main lesson of European history is that freedom is inviolable. “My colleagues from the ECR (European Conservatives and Reformists) Group who have grown up under communist regimes east of the Iron Curtain have a point when they warn against ‘dictatorially’ imposing policies and measures upon the citizens. What we need is a system of positive incentives that drive changes of individual behaviours instead of punishing our citizens. “

For the same reason, she believes that the transition will be successful only if it is a just transition, to use the jargon of the Commission’s documents. In practical terms, we need to make sure that the burden of change is distributed fairly across our societies. This is why Paulus would have much preferred had the German Climate Action Law, which entered into force in December 2019, included a per capita redistribution mechanism for the newly introduced carbon price.

Anticipating the reform of the EU’s Emission Trading System(ETS), the German government has in fact introduced a Green House Gas (GHG) surcharge that will go in effect in 2021. For MEP Paulus and the Greens that is a key instrument in meeting Berlin’s climate targets.

However, neither Paulus nor the Greens are happy with the price benchmark set by this first legislative package. During stakeholders’ consultation between Federal and Regional Parliaments and Governments, the Green Party’s concerted action managed to raise the surcharge from Euros 10 to 25 per tonne of CO2. For the Greens, and for the climate, it’s a start.

For the Green Party and Jutta Paulus, the common negotiating position on the Common Agricultural Policy (CAP) does not face up to the challenges of climate change and biodiversity and undermines the credibility of the Green Deal. Needless to say, this is not the last we have heard on the matter.