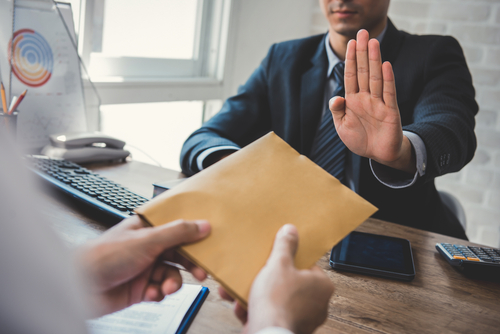 Brussels (Brussels Morning) The EU has welcomed Ukraine’s anti-corruption drive as the country took measures to strengthen and ensure the independence of its National Anti-Corruption Bureau (NABU).

The new act, which creates a mechanism for appointing NABU’s leadership, must be signed by the President of Ukraine, Volodymyr Zelensky to come into effect.

The anti-corruption body was established in 2015 to crack down on corruption among politicians and officials. The body’s independence from politics is watched closely by anti-corruption activists and by Ukraine’s foreign backers.

Matti Maasikas, head of the Delegation of the EU to Ukraine, welcomed the move as “a positive step on Ukraine’s anti-corruption reform agenda” and said that the bloc was “ready to support a transparent, merit-based selection process for a new NABU director.”

Transparency International (TI) ranked Ukraine 117th among 180 observed countries in its 2020 Corruption Perceptions Index. TI gave Ukraine 33 out of a maximum 100 points, noting that zero on this scale means that “corruption effectively replaces the government.”

Ukraine’s parliament passed the bill just one day after the country had secured a temporary agreement with the IMF that could lead to a loan disbursement of roughly 700 million dollars. More than 300 MPs voted in favour of the bill in the parliament of 450 seats.

According to the new law, the government is to appoint three delegates to a six-member commission that will select two candidates to head NABU.

Anastasia Radina, head of the parliamentary anti-corruption committee, pointed out that “independent experts will work in the selection commission and they will have a decisive influence on the decision on nominees for the post of the head of NABU.”

Moreover, she concluded, the government will not be allowed to interfere with NABU or its decisions.