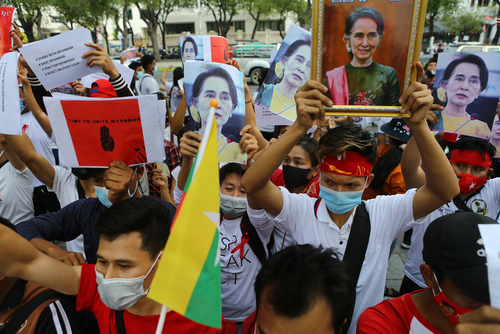 Brussels (Brussels Morning) The EU has warned that China and Russia are blocking an international response to the Myanmar coup, Reuters reported on Sunday.

On Sunday, Josep Borrell, High Representative of the EU for Foreign Affairs and Security Policy, asserted that the bloc could offer greater support to Myanmar once democracy is restored.

“The world watches in horror, as the army uses violence against its own people”, Borrell declared. More than 700 unarmed protesters have been killed by security forces since the military junta seized power at the start of February, according to the Assistance Association for Political Prisoners (AAPP), he said.

The AAPP stressed that, of the 700 or so victims, 46 were children.

The UN Security Council called on security forces in Myanmar earlier this month to release political prisoners, yet it did not condemn the coup.

The EU imposed sanctions against individuals and entities in the Myanmar military last month and is preparing to expand the sanctions. As part of the initial set of sanctions, the bloc targeted 11 individuals connected with the coup, including top military officials.

The EU’s direct investments in Myanmar in 2019 stood at some 700 million US doillars, in contrast to China’s 19 billion.

Borrell pointed out that the EU could invest more in Myanmar were democracy restored in the country.

The military insists it launched the coup because it claims the election in November was rigged, an assertion the the Union Election Commission of Myanmar flatly rejects.