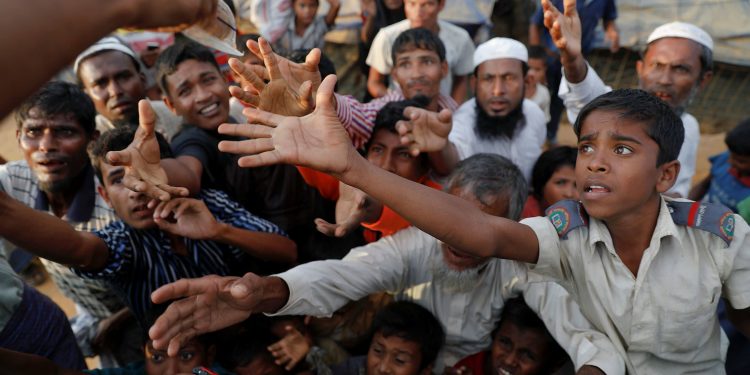 Brussels (Brussels Morning) — The European Commissioner for Crisis Management Janez Lenarčič spoke out on behalf of the Rohingya refugees and the need to support them when he participated in today’s virtual International Donors’ Conference.

“Today the international community came together to show its support and deliver further assistance to hundreds of thousands of Rohingya refugees and the communities hosting them,” Commissioner Lenarčič declared.

The virtual event was co-hosted by the EU, the US, the UK and the United Nations High Commission for Refugees (UNHCR) whose head, Filippo Grandi, participated. All urged countries to step up their financial assistance for the Rohingya refugees, host communities and internally displaced people in Myanmar.

“Solidarity with the Rohingya people means more than just meeting their basic needs. Refugees, like everyone else, have a right to a life of dignity and the chance to build a safe and stable future,” Grandi said.

Funds raised at the conference will go to international organisations and non-governmental organisations working on the ground to relieve the crisis in Bangladesh and Myanmar, in accordance with the UN-led Joint Response Plan.

In 2020, a total of Euros 96 million has been mobilised by the EU to support humanitarian development activities for the Rohingya refugees and related conflict prevention efforts.

Along with the UN, it has appealed for more than US$1 billion in development aid to meet the needs of the Rohingya. However, to date, less than half that amount has been pledged, leaving a significant funding gap that was further exacerbated by conflict

European Commissioner in charge of International Partnerships, Jutta Urpilainen, said the corona crisis had “increased the challenges on the ground” in Bangladesh and in countries in the region. “Today’s EU pledge reinforces our engagement with partners in support of people and development in the region. We must prevent a worsening of this crisis.”

Since the displacement of the Rohingya during the exodus from Myanmar in August 2017, the great majority has been hosted in camps in Bangladesh. According to the European Commission, there are currently 860,000 Rohingya in camps in Cox’s Bazar — the world’s largest refugee settlement — while other countries in the region are home to an additional 150,000 Rohingya refugees. An estimated 600,000 live in Myanmar’s Rakhine State.