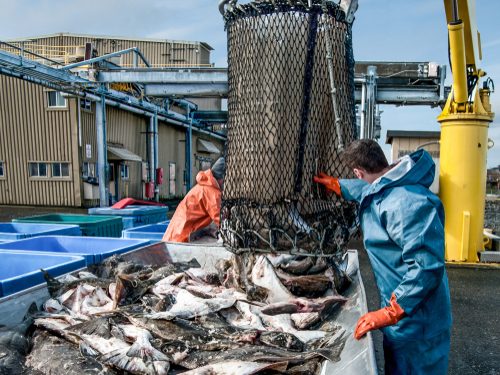 Unloading Fish: Fresh caught halibut drop from the bottom of a transport basket after being hoisted by crane from a fishing boat at a dock in Alaska.

Brussels (Brussels Morning) The EU and the UK concluded negotiations on a fisheries agreement yesterday afternoon that determines catch limits for jointly managed fish stocks for the rest of 2021.

Under the agreed terms, both parties will enjoy 75 shared fish stocks for the current year plus some deep-sea stocks this year and next. The deal also provides clarity about access limits for non-quota species, the European Commission said.

The deal was finalised in the course of a phone call between Commissioner for Environment, Oceans and Fisheries, Virginijus Sinkevičius and the UK Secretary of State for Environment, Food and Rural Affairs, George Eustice.

“This is good for fishermen and women, our coastal communities and our ports, as well as for the sustainable use of our marine resources. This also proves that two partners on both sides of the Channel can find agreements and move forward if they work together”, Sinkevičius declared.

The Commissioner added that the agreement would provide “predictability and continuity” for fleets about total allowable catches until the end of the year.

“After lengthy and difficult negotiations, this first post-Brexit fisheries agreement is an important milestone, as only through cooperation can the EU and the UK address the management of their shared fish stocks”, said Vera Coelho, senior director for advocacy in Europe of the marine NGO, Oceana.

The agreement brings closure to the first-ever annual consultations on fishing opportunities between the EU and the UK under the EU-UK Trade and Cooperation Agreement (TCA).

The Oceana director called on the EU and the UK to “stop repeating management errors of the past”, and urged them to set catch limits above the recommended scientific advisory levels and thus help reduce overfishing across EU seas.

“If both parties want to lead on sustainable fisheries management internationally and help counter the climate and biodiversity emergencies, they must end overfishing immediately”, Coelho observed.

The agreement is based on the best available scientific advice on the state of fish stocks, as provided by the International Council for the Exploration of the Sea, the Commission said.

However, a recent fisheries audit by Oceana reveals that only around 43% of fish stocks shared among the UK and the EU are known to be exploited at sustainable levels, whereas the rest of the stocks are either overfished or their exploitation status is unknown.

While fishery and aquaculture products can move freely and tariff-free inside the EU single market, EU-UK trade in such products became subject to arrangements under the TCA since 1 January 2021.

The UK’s Brexit decision entailed an impact on access to fishing grounds for both EU and UK vessels, mostly hitting the EU fleet. As a result, trade in fisheries products became subject to tariffs and/or non-tariff measures and triggered customs delays, mainly affecting UK exports.

In the TCA, both parties are informed of the lists of the other party’s vessels requesting authorisations and licenses to fish in their respective waters.

As soon as the EU and the UK sign the agreement, which is expected to happen in the coming days, both parties will be able to engage in quota exchanges.