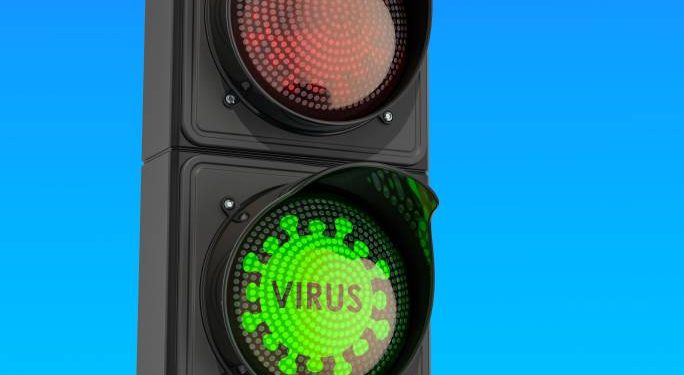 London (Brussels Morning) A new EU traffic light system has come into effect in Ireland, as of midnight on Monday.

According to the European-wide system, anyone arriving from a country designated ‘green’ can forego quarantine or testing measures when they enter a new state.

Anyone coming from an ‘orange’ country also need not isolate as long as they’re holding a negative result from a test taken no later than three days before they arrive in a new region.

Those traveling from red zones will have to restrict their movements for 14 days.

The traffic light system, a map of EU areas according to risk, has been determined by the European Centre for Disease Prevention and Control, which will update its assessment every week.

Various factors feed into an area’s rating, including cases per 100,000 population — based on a 14-day reading — testing capacity and positivity rates.

There are currently no green-zone countries, while Norway and Finland are the only European states marked orange.

The new EU guidelines also say passengers do not have to enlist restrictions if they’re traveling for purposes deemed ‘essential’, whether for business, family or medical reasons.

Anyone arriving in Ireland from Denmark, however, must quarantine for 14 days in light of the mutated coronavirus strand discovered recently in its mink population.

Nationally, Ireland operates a five-tier system of restrictions and is currently under level 5 lockdown rules with a ban on all non-essential travel.

The healthcare company behind the new facilities, RocDoc, said it would perform the pre-departure tests for passengers in line with the EU traffic light system, with results available within a few hours. Fees for the private testing service start at €149.

Testing procedures for arrivals into Ireland are yet to be announced.