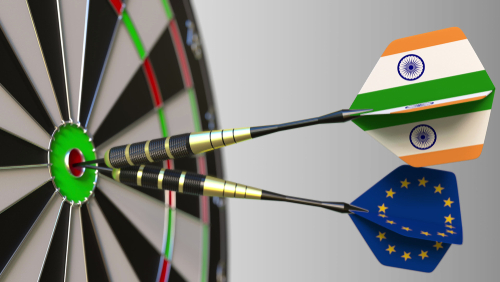 The plan, which still needs to be approved by EU ambassadors and New Delhi, aims to  strengthen economic cooperation between the bloc and India as a counter to the rise of China.

If the plan is approved, the EU and India are “to resume negotiations for a balanced, ambitious, comprehensive and mutually beneficial trade agreement which would respond to the current challenges”, according to a draft statement.

“Our partnership will promote a transparent, viable, inclusive, sustainable, comprehensive, and rules-based connectivity”, the draft notes. It concludes:”we emphasized our commitment to a free, open, inclusive and rules-based Indo-Pacific space, underpinned by respect for territorial integrity and sovereignty, democracy, and rule of law”.

Talks ahead of the summit

EU Council President Charles Michel is to talk to Modi ahead of Saturday’s virtual summit, when they will be joined by von der Leyen and German Chancellor Angela Merkel.

According to a study conducted by the European Parliament in 2020, a time when the UK was included as an EU member state, the bloc could benefit by up to 8.5 billion euro from the trade deal.

Modi and UK Prime Minister Boris Johnson held an online meeting on Tuesday, with Britain due to start trade talks with India this year.

According to EU records, the bloc is India’s main export market, accounting for approximately 15% of the country’s foreign sales.

In recent years, India has overtaken China in terms of economic growth, which makes the country an attractive market for the EU.

While India has been lowering import tariffs since 1990, the EU views levies on crops, drinks, food and motor vehicles as obstacles to a trade deal.