EU to escalate its response to crackdown on protests in Myanmar 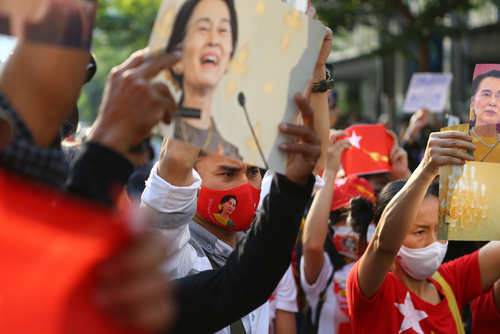 2021,February,1,Bangkok,Thailand,NLD supporters in Bangkok are protesting outside Myanmar Embassy against the military coup 17.06 Police dissolve rallies in front of the Myanmar embassy Initially.

Brussels (Brussels Morning) Chaos continues to reign on the streets of Myanmar, as the military authorities brought new charges against the democratically elected leader Aung San Suu Kyi on Monday. This followed the weekend’s deadliest crackdown on public protests to date, which prompted the EU to announce new measures in response to developments in the country.

According to the United Nations human rights office, the police opened fire on protesters in various parts of the country in the course of the weekend, with at least 18 people reported killed and more than 30 wounded in clashes on Sunday. An independent monitoring group estimates at least 30 people have been killed by security forces since the military assumed power.

“Violence will not give legitimacy to the illegal overthrowing of the democratically elected Government”, Borrell said. “The European Union will take measures in response to these developments shortly”, he announced.

Suu Kyi was seen on Monday for the first time since the military toppled her government on 1 February, when they asserted that her party’s overwhelming win in the November elections was the result of election fraud, a claim they provided no evidence to support.

The deposed leader appeared via videolink at a court hearing, where she was charged under a colonial-era, penal code law which prohibits publication of information that “may cause fear or alarm”. Attorney Min Min Soe told Reuters she looked relatively healthy, though she might have lost some weight since the arrest.