by Angelos Kaskanis
in Features, World 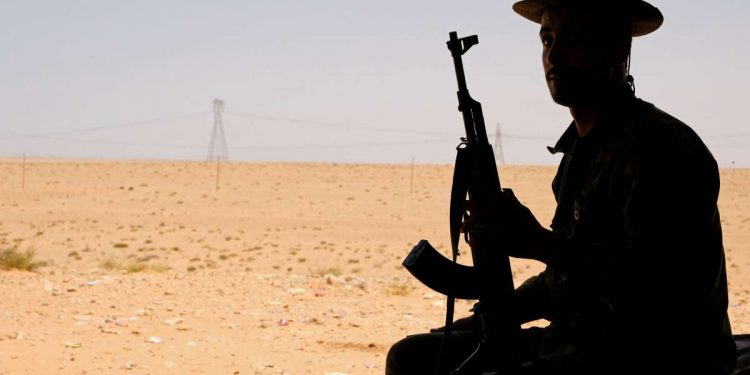 A Libyan soldier manning a checkpoint

The European Council scaled up sanctions against persons and entities violating the UN arms embargo in Libya last week. EU measures entail travel bans for 17 listed persons and the freezing of assets for 21 persons and 19 entities. How effective these sanctions might be in disrupting a proxy war in Libya has been called into question.

However, a UN confidential report leaked by diplomatic sources to the Wall Street Journal on Tuesday suggests that the United Arab Emirates (UAE) ramped up deliveries of military equipment to the Haftar regime in a bid to offset the influence of regional rival Turkey. It is now well-established that the provenance of this arsenal is often the EU.

From the UAE to Libya

It is no secret that the Gulf state plays a major role in supporting the Haftar regime. On 12 September, German and Italian frigates apprehended the merchant vessel Royal Diamond 7, with a cargo of fuel for fighter jets. According to its manifest, the vessel had sailed from the port of Sharjah in the United Arab Emirates and was heading to Benghazi.

Weapons exporters often divert exports to the UAE and other Arab states allied to Libya. According to information released to the German opposition, in the first quarter of 2020, Germany exported €330 million worth of weapons and ammunition to states involved in the Libyan war. The German government has already approved arms exports to a value of €15.1 million to Turkey and €7.7 million for the United Arab Emirates (UAE).

In June 2019, the New York Times reported that US-made Javelin anti-tank missiles discovered in Libya had been exported initially to the UAE in 2008. It is also known that Chinese and American-made combat UAVs originally exported to the UAE replenished General Haftar’s arsenal over the last year. The fact that UAVs depend on satellite-navigated command and control centres begs the question which country is providing the satellite infrastructure.

Brussels Morning approached MEP Dietmar Köster, a member of the European Parliament’s Legal Affairs and Justice and Home Affairs Committees, for his views about the Libyan proxy war.

“Like many conflicts, we are dealing {in Lybia} with a proxy war. There can be only a political, not a military solution to the Libyan crisis. The European Parliament, therefore, supports the UN-led mediation processes that kicked off at the Berlin Conference on Libya and aims to reach an international consensus and political settlement between the conflicting parties. The EP also adopted the annual report on arms exports last week and clearly articulated – thanks to the Socialist group – the need to enforce the UN arms embargo on Libya. Following the decision taken by the UN, we support the IRINI mission to stop arms deliveries.”

EU enforcement of the Arms Embargo

Brussels Morning also asked MEP Özlem Demirel (Die Linke, NGL/GUE) to comment on the EU’s failure to halt the diversion of arms first shipped to third countries by certain EU member states for re-routing to conflict regions such as Libya.

“It is particularly ridiculous that the EU imposes sanctions because of the arms embargo on Libya, including three companies from Turkey, Jordan and Kazakhstan, but at the same time torpedoes all sanctions against its own EU member states from which the weapons originally come from. It is an open secret that EU arms companies, above all from Germany and France, knowingly supply both civil war parties in Libya (indirectly) with weapons.

“There is a European set of rules that prohibits arms exports to crisis areas, the so-called Common Position on control of exports of military technology and equipment. It carries eight criteria which have to be met before an export licence is granted. If these eight criteria were applied, none of the arms exports to Turkey, Egypt and Saudi Arabia would be possible.

“But since there is no sanctions mechanism to punish exporting EU companies and countries, these exports continue without legal consequences.”

EU member states have historically failed to maintain a common front over arms exports to Libya. In the early 2000s, Italy was the leading arms supplier to the Gaddafi regime, with orders valued at €276.7 million between 2004 and 2009. The UK’s export industry took off in 2005 with orders worth €58.9 million, reaching a total of €119.35 million over a five-year period. In 2009, small arms valued at €79.7 million were transited through Malta en route to Libya.

The inability to prevent the diversion of arms to conflict countries is not limited to Libya alone. In 2019, the UAE was accused of supplying al-Qaeda-linked militias in Yemen with US-made weapons. It was also alleged that the UAE was supporting the military junta that has been violently repressing pro-democratic forces in Sudan.