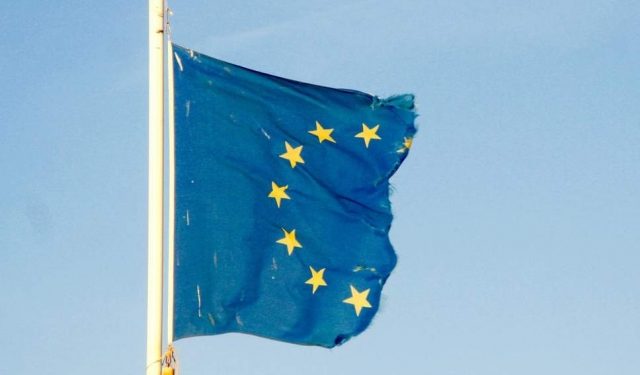 THE EU has been dealt a major blow after a shock poll revealed growing support for leaving the Brussels bloc among its ‘Big Four’.

The Union is under pressure after results revealed member states would consider exiting the bloc if Brexit proved to be a success. Nearly half of Italians quizzed said they would consider leaving the EU if the UK and its economy were in a “good state” in five years after its exit.

Forty-five percent of Italian citizens said they agreed or strongly agreed with ‘Italexit’ when they were asked “I will be more likely to support my country leaving the EU if the UK and its economy are in a good state in five years, agree or disagree?”

Meanwhile, the Redfield and Wilton Strategies poll, commissioned by Euronews, found 38 percent of French people would consider unshackling itself from the bloc in the event of a successful Brexit.

While Spain saw 37 percent of its citizens in favour of leaving.

Germany, the EU’s largest economy, was the least likely to support leaving the bloc, with just 30 percent of respondents supporting a departure.

Britain voted to leave the EU by 52 percent to 48 percent in the 2016 referendum and the UK will finally be free from the bloc at the end of the year.

The poll found France was most in support of Brexit with 45 percent saying they believed Britain would benefit from Brexit in the long-term, even if it “suffered in the short-term”.

In Italy, 43 per cent said the UK’s departure from the EU would be a success, while 35 percent of Spanish citizens believed Britons would prosper.

But in Germany, only 31 per cent said they agreed to some extent that the “UK will benefit from leaving the EU in the long-term” compared to 43 per cent who disagreed.

It was also bad news for the EU’s relationship with Italy when the Big Four were asked “to what extent has being a member of the European Union had a positive or negative effect on your country”.

Just 32 per cent of Italians said being a member of the EU had a positive or very positive impact on Italy, with 34 percent saying it had a somewhat or very negative impact.

But it was better news for the bloc when 57 percent of Spanish respondents said they believed being a member of the EU had a positive effect on the country compared to just 15 per cent who believed it was negative.

This was also echoed by 47 percent of Germans and 39 per cent of French citizens who backed being a member of the bloc for its positive impacts compared to19 per cent and 24 per cent respectively who believed it had a negative impact.

It comes after ex-MEP Alexandra Phillips warned France and Italy could be next to quit Brussels after Brexit.

The former Brexit Party MEP pointed to the Génération Frexit movement launched by Charles-Henri Gallois and the Italexit party set up by Gianluigi Paragone.

Both have been inspired by Nigel Farage’s Brexit Party, which stormed to victory in the UK’s European elections last year and piled pressure on the Conservatives to get Brexit over the line.

The Brexiteer told Express.co.uk: “I think really all eyes on France and Italy.“And especially France as we’re gearing up for another presidential election soon.

“If a Frexit candidate goes into the running then that person is going to suddenly have a very significant platform because they will be part of the presidential debates and really bring the issue of leaving the EU to light.”

The poll asked 1,500 people each from France, Germany, Italy and Spain between July 17-18.