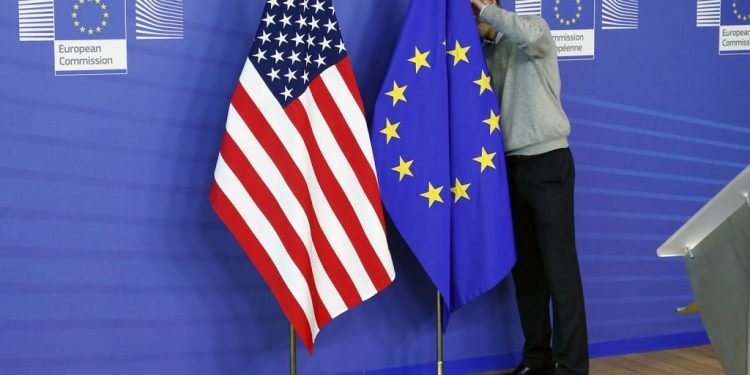 Brussels (Brussels Morning) EU Commission President Ursula von der Leyen has declared the need for a new transatlantic trade agreement and for the EU and the US to cooperate on issues of climate change and digital economy, Reuters reported yesterday, Tuesday.

Rather than a return to the agenda of five years ago, the EU should take the initiative and make the US an offer, she said. Their shared values and history meant that cooperation between the two would ensure a world that is more prosperous, peaceful and stronger, she added.

Given the changing global landscape, von der Leyen said in an address to EU ambassadors around the world, it was time to forge a new transatlantic agenda that fits today’s today.

She believed that under President-elect Joe Biden, the US would rejoin the Paris Agreement, she said. Commenting on next year’s international meetings on biodiversity and climate change, von der Leyen said the EU would push for ambitious commitments, noting that the US was in a position to help the EU in this regard.

Now is the time to strengthen, not weaken, international organisations like the UN, the World Health Organisation (WHO) and the World Trade Organisation (WTO), she said, stressing that they should be reformed where appropriate.

Von der Leyen urged the US to cooperate with the EU in setting of global rules for the digital economy, data protection and fair competition as well as cracking down on hate speech and propaganda.

She allowed that taxation of digital services providers might be a point of contention, but hoped for a global consensus on the issue.  Atter talks on cross-border taxation lost momentum and then came to a stop in the midst of the coronavirus pandemic, G20 finance ministers decided last month to extend negotiations until mid-2021.

Von der Leyen stated that the new deadline must be final and that the EU should take action if no agreement is reached by then.