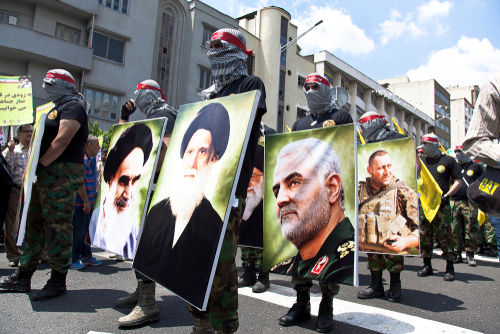 Quds Day rally, Parade of military forces, along with photographs of Qasem Soleimani, Iran Tehran, May 31, 2019.

Brussels (Brussels Morning) The EU has slapped sanctions on eight Iranian security force officials over the crackdown on protests in November 2019, Reuters reports.

The bloc imposed asset freezes and travel bans against the individuals in question, representing the first EU sanctions against Iran over human rights violations since 2013.

The EU has been reluctant to anger Iran, hoping the soft approach would avoid jeopardising current efforts to resuscitate the nuclear deal signed in 2015 in jeopardy.

The latest batch of sanctions targets three prisons in Iran as well as Hossein Salami, commander-in-chief of the Islamic Revolutionary Guard Corps.

“Salami took part in the sessions that resulted in the orders to use lethal force to suppress the November 2019 protests”, which, the bloc noted, means he “therefore bears responsibility for serious human rights violations in Iran”.

The three cited Iranian prisons include two in the Teheran area where the bloc says 2019 protest detainees were tortured and denied treatment.

Iran’s Foreign Ministry spokesman, Saeed Khatibzadeh, noted that “in response, Iran suspends comprehensive talks with the EU, including human rights talks and all cooperation resulting from these talks, especially in the areas of terrorism, drugs and refugees”.

Javaid Rehman, UN Special Rapporteur on the human rights situation in the Islamic Republic of Iran, presented a report last month that asserted Iran had failed to investigate the crackdown or hold anyone accountable.The list of Iranian individuals and entities under EU sanctions currently includes 89 individuals and four entities, with diplomats striving to make clear that the sanctions are not connected to efforts to reactivate the nuclear deal.