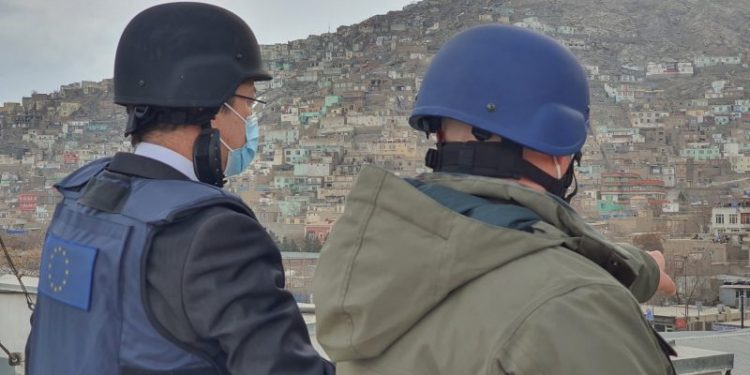 Brussels (Brussels Morning) On a brief visit to Kabul, Afghanistan, EU humanitarian aid commissioner Janez Lenarčič promised emergency support for healthcare and shelter, as well as emergency education for the displaced. The EU will disburse 32 million euros in immediate relief, adding to the other commitments the EU has agreed with its Afghan partners, mostly in the form of development aid.

Women’s participation in the building of Afghanistan’s future was a particular theme for the Commissioner’s early February visit to the country’s capital.

”Afghanistan is at a turning point in history. It stands a chance to end long decades of deadly conflict but only if peace and the interests of the Afghan people are at the centre of the efforts”, Commissioner Lenarčič tweeted in a comment on his meetings with Afghan President Ashraf Ghani, as well as the country’s humanitarian coordinator and partner organisations.

At present, the country is at a stage of aid-dependency where up to half of the population is in need of relief assistance.

”Whilst peace negotiations are ongoing, humanitarian aid can be the central way to reach more than half of the population in the country, some 19 million people”, the Commissioner said in a statement.

Last year, EU emergency humanitarian aid totalliing 70 million euros was targeted towards those internally displaced due to the conflict and natural disasters. The harsh Afghan winter exacerbates the already dire conditions for many in the country’s remoter mountainous regions. In talks with a key Afghan political leader Abdullah Abdullah, now heading the High Council for National Reconciliation, Lenarčič urged for unimpeded access to deliver services to the most vulnerable.

”The protection of civilians, of education facilities, of hospitals and humanitarian missions cannot wait till the end of the peace negotiations,” he said. ”For them to conclude successfully, respect of international humanitarian law to safeguard lives is an essential prerequisite for a lasting peace and sustainable future of the country”.

Recently, officials, doctors, police officers and civil society activists have been killed in violence aimed at those representing the government’s reconstruction efforts following the failure of peace talks with the Taliban in January to deliver a ceasefire. Last year, attacks against medical and educational facilities multiplied, even as the infra-Afghan peace talks continued. Armed groups defied the calls for a ceasefire.