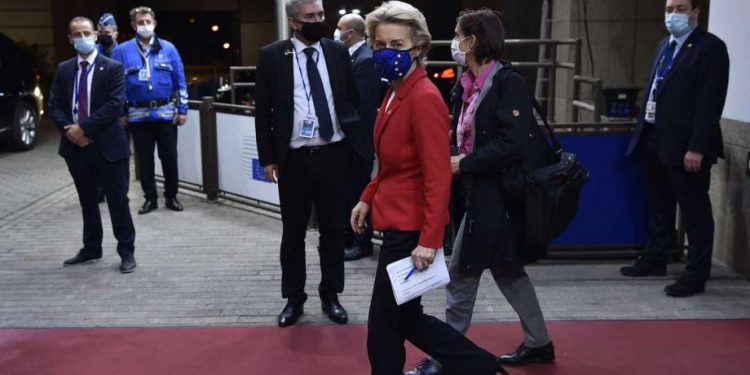 EU leaders finally reached agreement on Belarus sanctions at their Brussels summit, Reuters reports, after being deadlocked by a threatened veto when Cyprus insisted that the bloc also take measures against Turkey for its oil and gas exploration activities in disputed waters in the Eastern Mediterranean.

According to the agreement, which was reached in the early hours of this morning, the EU is to impose sanctions against some 40 Belarusian officials accused of rigging last August’s presidential election and of organising the ensuing crack down on protests. The decision fulfils the bloc’s promise to support the pro-democracy demonstrations in Belarus. German Chancellor Angela Merkel underlined how the EU is sending an important message by taking action against those who obstruct democracy.

EU leaders promised Cyprus that they would review Turkey’s behaviour when they meet in December and, in the event the East Med situation has not improved, they would move to impose sanctions. Austria’s Chancellor Sebastian Kurz noted that the EU is now on record as having issued a clear warning to Ankara about sanctions and that they will be imposed if Turkey continues to violate international law.

The UK and Canada had imposed sanctions against Belarus in support of the pro-democracy protests, unnamed diplomats noted, while the EU’s credibility was suffering the consequences of inaction as it sought unanimity to make its move. Another unidentified diplomatic source pointed out that Chancellor Merkel was loathe to take a tough stance with Ankara and that this explained why the bloc had given Turkey two months to ease tensions with Cyprus and Greece.

In that regard, some progress has been made between Turkey and Greece with the two NATO members having agreed on Thursday to set up a military de-confliction mechanism specifically to avoid accidental clashes at sea.

The EU’s list of sanctioned Belarusians does not include President Alexander Lukashenko, DW notes. However, EU Council President Charles Michel insists the sanctions must go through to ensure the EU’s credibility. The bloc, he asserted, must and will keep a close eye on the situation in Belarus and be prepared to react as needed.