EU pushes UK to move on a deal as stocks fall 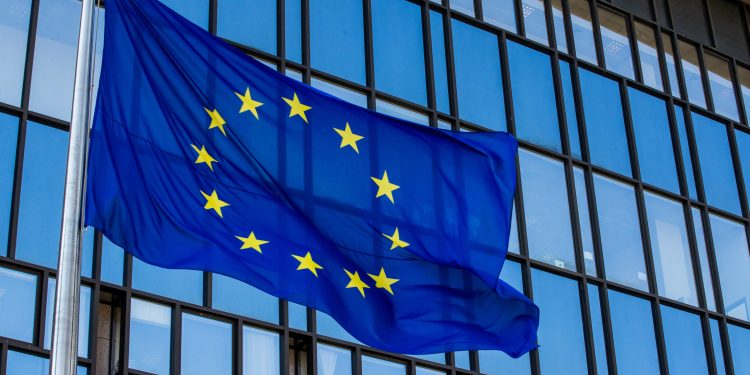 epa08324062 A view of EU flags next to the European Council in Brussels, Belgium, 26 March 2020. EU leaders will debate the coordination of EU efforts to tackle the Covid-19 epidemic, as well as other issues, including foreign affairs, digital policy and enlargement. EPA-EFE/STEPHANIE LECOCQ

London (Brussels Morning) The 27-member coalition of European nations has pushed Britain to budge on their current lines on fisheries, state aid and dispute settlement, in order to move negotiations forward to establish a trade deal.

The uncertainty around Brexit talks has impacted London stock markets, in addition to the COVID-19 pandemic, seeing the FTSE 250 diminish 1.5 percent while the FTSE 100 slipped 0.5 percent Tuesday.

France has also been rigid on fishing rights, not wanting to upset the current status quo on quotas, while Britain wants a bigger slice of the pie for its fishermen.

Since Britain announced it would be leaving the bloc after 43 years of being part of its membership, negotiations on both a divorce deal and a trade agreement have been fraught.

There is now less than three months before the end of its transition period, where it still has access to the single market and customs union and a trade deal is yet to be negotiated. The EU summit this week is the crunch point as to whether a trade deal is possible. If so, negotiations could go on until mid-November, leaving the European Parliament minimum time to ratify the deal.

Both parties have said that while not ideal, they would be willing to continue the new year without an agreement, at which point World Trade Organisation (WTO) rules would apply.

“We expect substantial progress by our friends in the United Kingdom in key areas” said German politician Michael Roth, naming governance, ‘level playing field’ and fisheries as the sticking points.

Contingency planning is being executed in preparation for relations without a deal, said Roth, covering vast areas from trade to nuclear energy.

Chief Brexit negotiator Michel Barnier has been in London for talks with UK counterpart David Frost in decent days, but despite recent optimism from both sides, his current assessment, according to Reuters sources, is that progress is “far from sufficient”.

“We will negotiate until the last minute”, said Konrad Szymanski, a minister from Poland, a country vested in keeping strong ties with Britain.