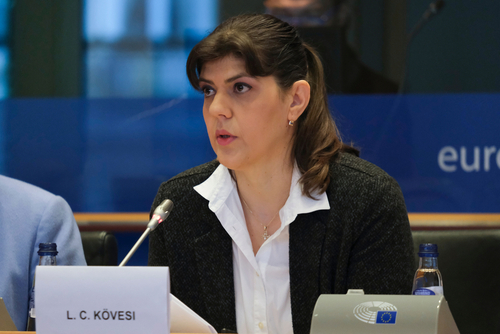 Brussels (Brussels Morning) The long-awaited European Public Prosecutor’s Office (EPPO) officially opened on Tuesday, in a timely move that allows it to stand watch on the billions of euro about to be spent across the bloc as part of the EU’s resilience and recovery plans.

The office’s chief, the renowned Romanian anti-corruption prosecutor Laura Codruța Kövesi, called the launch an “historic moment” , as the office finally opened its doors. “Our target is economic and financial criminality”, Kövesi said. “Make no mistake, this is the most common threat to any democratic society.”

Initially scheduled to open late last year, the launch was delayed because the 22 participating member states were late in nominating their prosecutors to the newly-formed body. Even with the formal opening, Slovenia and Finland have yet to nominate their prosecutors.

The EPPO is intended to plug the gaps in the bloc’s crackdown on cross-border fraud and misuse of EU funds. It will have supranational authority in matters pertaining to its jurisdiction. The European Anti-Fraud Office (OLAF) is expected to send its case files to the new prosecutors.

AP reports that the office expects to handle some 3,000 cases annually, organised in 15 permanent chambers with 22 prosecutors from participating member states. An additional force of 140 prosecutors across the EU can be tapped for assistance when it comes to the use of local languages, methodologies and technology.

Five countries from the 27-member bloc have opted not to participate in the newest EU body. Denmark, Ireland, Hungary, Poland and Sweden declined to join, although the European Commission has noted that Stockholm is planning to join next year.

EPPO will monitor and prosecute any financial fraud in the use of the EU budget, as and where required. This is an especially sensitive issue given the pending start of the 750-billion euro coronavirus recovery plan, which the more frugal bloc members want to ensure will not be wasted or abused.