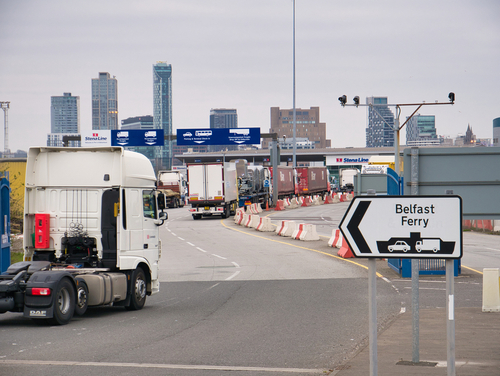 Brussels (Brussels Morning) The European Commission has prepared a package of measures for proposal to the UK, in a bid to ease the transit of goods from mainland Britain to Northern Ireland.

Although comprehensive, the suggested EU measures fall short of the sweeping overhaul London has been demanding as it seeks to walk away from the provisions set in the so-called Northern Ireland Protocol that is part of the British divorce agreement with the Union.

European Commission proposals are designed to facilitate easier customs checks for meat, dairy and other food products, as well as the flow of medicines to the UK province. The Protocol, which established a de facto customs border between Britain and Northern Ireland, threatened severe disruptions for supermarkets and pharmacy chains dependent on supplies of goods from mainland Britain.

It was instated to satisfy all the British “red lines” during the Brexit negotiations – taking Britain out of the EU single market, but at the same time preserving the Belfast Good Friday Agreement, which brought an end to decades of sectarian violence on the island of Ireland. The Good Friday Agreement mandated that no hard border would be erected on the island, making it necessary for future customs checks to be moved out into the Irish Sea.

Tensions between the Union and the UK escalated as London unilaterally extended the grace period on checks for certain types of goods, and proceeded to demand that the entire agreement be reworked.

The latest set of EU proposals were described by the Irish Prime Minister Micheal Martin as “EU in solution mode”, his way of saying that Brussels had listened to the UK’s legitimate concerns and is looking for workable answers, and that it is now up to the UK government to reciprocate by entering that same mode.

The co-chair of the British Conservative Party, Oliver Dowden, promised that London would engage “fully and constructively” with the EU, as he welcomed the steps taken so far, while reiterating that it was important to make “fundamental changes” to the NI Protocol.