There are 79 oil and gas tankers currently bound for Europe from Russia. Nine of these left Russia in the last 24 hours, untouched by EU sanctions.* Since the beginning of the invasion of Ukraine, at least four special flights also delivered nuclear fuel from Russia to nuclear plants in Slovakia, the Czech Republic and Hungary, despite an EU flight ban. State-owned Rosatom is also allowed to continue its involvement in the maintenance and construction of nuclear power plants in the EU, including in Finland and Hungary.

Greenpeace EU climate and energy campaigner Silvia Pastorelli said: “The reluctance by governments to hit imports of Russian oil, gas and nuclear fuel is proof that they’re desperately trying to keep a broken energy system alive. Diversifying dirty energy sources will also only increase exposure to future wars and environmental destruction. Whether it’s oil from Saudi Arabia, fracked gas from the US or uranium from Kazakhstan, these are blood fuels, which accelerate the climate and nature crisis. To support peace and security, the EU must unlock energy savings in our homes and industries, run our cities on public transport and cycling infrastructure, and roll out renewables to supply all the energy we need.” 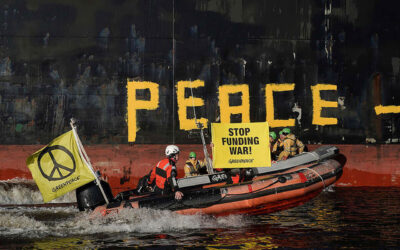 Earlier on Thursday, an overwhelming majority in the European Parliament called on governments to back a full embargo on Russian gas, oil, coal & nuclear fuel.

EU coal imports from Russia are worth around €4 billion, while oil and gas imports together are worth about €100 billion.

For every 1% improvement in energy efficiency, EU gas imports would fall by 2.6%, lifting 7 million people out of energy poverty

While oil and gas prices skyrocket, solar energy is now the cheapest form of energy in most parts of the world, with wind energy prices also continuing to fall to record lows.