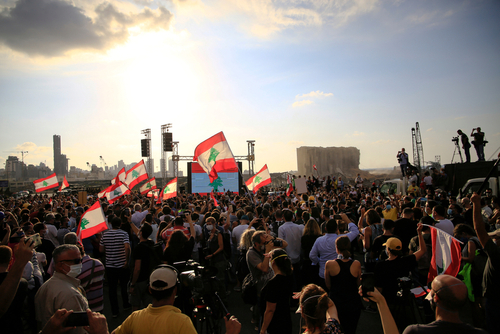 Brussels (Brussels Morning) The EU is preparing sanctions against Lebanese politicians for preventing the formation of a new government, according to EU diplomats and officials, Reuters reported on Wednesday.

France is leading the move to step up EU pressure on Lebanese politicians who have been squabbling for months as the crisis in the country deepens, with citizens facing food and fuel shortages, electricity blackouts and hyperinflation.

Six EU diplomats and officials noted that Hungary is opposed to the plan to apply pressure on Lebanese politicians. However, they stated that the bloc started preparing sanctions after foreign ministers agreed to implement the plan earlier this week.

Sanctions against senior Lebanese politicians could yield results since many have investments, accounts and real estate in the EU as well as sending their children to pursue university degrees in the bloc.

The French government has indicated that it has already taken action by closing its borders to some Lebanese officials. France maintains that Lebanon’s crisis is the result of decades of corruption and overspending.

“The level of impatience with the ruling class is growing, they don’t seem to have their peoples’ interest at heart”, one senior EU diplomat asserted.

Commenting on the plan to slap Lebanese politicians with sanctions, the diplomat advised, “expect to see a decision in the next three to four weeks”.

While Germany and France are in favour of the move to impose sanctions, there remains disagreement among EU member states, with many yet to declare their positions.

According to Josep Borrell, High Representative of the EU for Foreign Affairs and Security Policy, “the people are suffering but the political leaders are not taking responsibility while the country is literally falling apart.”

Diplomats acknowledge that it is unclear how the EU can exert pressure on Hezbollah, which is partly responsible for the Lebanese crisis and wields a lot of power in the country.

On Tuesday, the US imposed sanctions against seven Lebanese connected with Hezbollah and urged other countries to take similar action.