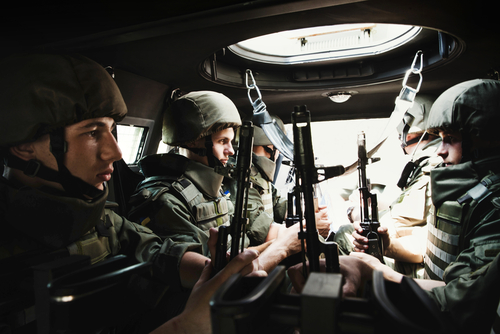 KIEV, UKRAINE - Jul 26, 2014: Soldiers of operational Brigade in National Guard training center "Petrivtsi" before being sent to the ATO zone.

Speaking after his meeting with German Chancellor Olaf Scholz in Berlin on Tuesday, he noted that France and Germany want to pursue dialogue with Moscow, but will retaliate if Russia attacks Ukraine, France24 reports.

Macron stressed the importance of de-escalation but reiterated that “if there is an attack, there will be retaliation and the price will be very high.”

He welcomed talks between Russia and the US but pointed out that they failed to yield any clear results, adding that he plans to speak with his Russian counterpart Vladimir Putin later this week.

“We call for de-escalation of tensions and I want to also say how united Germany and France are on this subject,” Macron continued and added that Western countries are “totally united.”

“We expect from Russia clear steps that contribute to a de-escalation of the situation,” Scholz noted and pointed out “we are all in agreement that a military aggression will trigger heavy consequences.”

Germany has been sending mixed messages about Ukraine and Berlin has refused to sell weapons to Kiev. Ukrainian Minister of Foreign Affairs Dmytro Kuleba warned that Berlin’s decision was encouraging Russia to attack.

Scholz stressed that Germany has “done a great deal to actively support economic development and democratic development in Ukraine,” adding that Berlin has historic reasons for refusing to send weapons to “war zones.”

He added that Germany wants to ensure that Ukraine remains a gas-transit country and stressed that “Ukraine knows it can count on Germany.”

Macron expressed the belief that his meeting with Putin will provide an opportunity for the Russian President to clarify his plans for Ukraine.

He expressed concern over the situation in Ukraine and stressed the importance of preparing a common European response in case the situation escalates.

“It also means we should have a dialogue of clarification with Russia because I think that this dialogue is necessary to try to remove the ambiguities,” Macron concluded.

While Moscow rejects accusations that it is preparing an invasion of Ukraine, some in the West are concerned that a conflict could start.