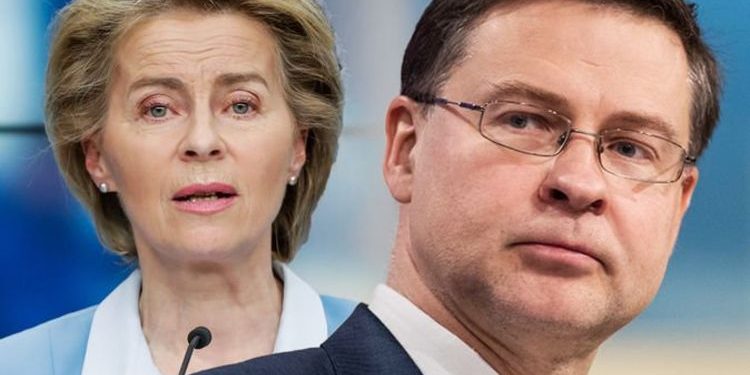 THE European Union is planning to introduce a coronavirus tax in a bid to maximise income and centralise even more power in Brussels, in a move which would ultimately prove disastrous for the bloc, a Germany former MEP has claimed.

And without Britain, he said the chances of such a tax becoming a reality were significantly increased. Hans-Olaf Henkel was speaking after Valdis Dombrovskis, the European Commissioner with responsibility for the EU’s finances, outlined his proposal to introduce a digital tax targeting tech giants. Critics including Mr Henkel believe such a tax is part of a wide strategy aimed at swelling the bloc’s coffers to cover the costs of measures aimed at mitigating the impact of the pandemic.

He told Express.co.uk: “Whether they call it ‘corona-tax’ or give it a different name, in any case they will justify it with corona.

“It may come under different disguises: a wealth tax (‘The ‘rich’ should contribute more’); temporary increases of VAT (which will stay forever and which will be paid by all consumers); increased income taxes (people with higher income could contribute more); a plastic tax (‘let’s kill two problems – plastic in oceans and corona – with one tax’).

“Now, European Vice President Dombrovskis has discovered the lack of digitalisation to be a good justification of a European ‘digital tax’.

“A corona tax, either with that name or with a different one, introduced either nationally or Europe-wide, will be justified with the alleged need to “reconstruct Europe with a new ‘Marshall Plan'” but it ignores the fact Corona did not destroy factories, bridges, houses.

“Nothing needs to be reconstructed. Corona is being misused to further centralise the EU.”

Mr Henkel added: “Europhiles have dreamed of European taxes for a long time.

“But for good reasons any such plans have so far been blocked especially by Northern countries such as Germany, Austria, The Netherlands, Denmark, Finland and, of course, Britain.

“The current European agreements do not foresee European taxation for good democratic reasons, such as the fact that taxation should be decided by the people in the countries.

“As such, we saw the voters for instance in Sweden to agree for higher taxes, so the State could finance more social benefits.

“At the same time we saw voters in other countries, such as Spain, to choose less taxes and less Government.”

He warned: “If Brussels rather than the voters in each country would now decide on European taxation it would constitute a further violation of a democratic principle.

“Remember, the EU just decided to become a lender. Billions of euros because of the coronavirus? That was also a gross violation of the EU’s legal framework.”

He explained: “Competition between smaller units always produces a better result for the whole. Today, if one country increases its taxes too high, businesses and even people might be incited to go somewhere else.

“This threat has been a healthy regulator within the EU. Eliminating tax competition will therefore lead automatically to higher taxation in the EU.

“Overall, it will make the EU less competitive as compared to other regions in the world such as the USA, China, the Far East.

“Eliminating tax competition would be for the EU the same as if the cyclist of the Tour de France would promise to each other to arrive in Paris at the same time.

“This might be very comfortable for the cyclists but will result in a slow and boring ‘race’.”

Up to now, countries had been highly resistant to the concept of bloc-wide taxation, Mr Henkel said, largely thanks to the UK’s influence.

He said: “I don’t argue the fact that digitalisation changes the Business structure.

“Having spent all my professional life in the IT industry (my last position there was President of IBM Europe, Middle East and Africa) I witnessed numerous attempts to introduce new taxes.

“Remember the ‘Automation Tax’ as a reaction to the increased automation in the industry?

“It went the way Dombrovskis’s ‘digital tax’ will also go: into the dustbin of crazy economical ideas.

“Unfortunately, we lost Britain as one of the last voices of common sense in Brussels to put it there.”