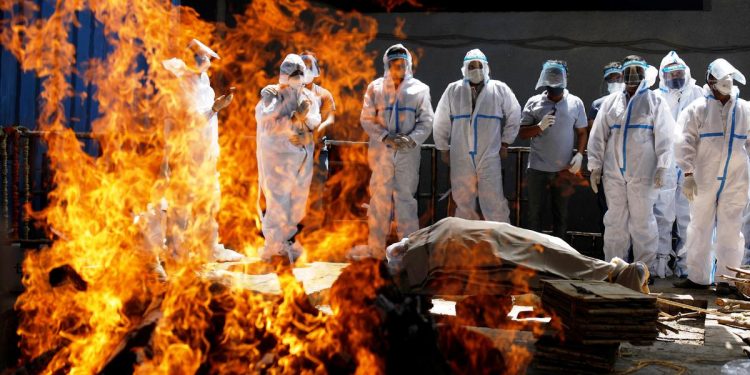 Relatives in PPE at a funeral in Delhi.

Brussels (Brussels Morning) The EU, Britain and the US have announced emergency measures aiming to aid India cope with its most recent coronavirus pandemic wave, which continues to reach record highs, leading the world to fear it could result in fresh mutant strains, RFI reports.

The EU has mobilised its Emergency Response Coordination Centre tasking it to help provide medicine and much-needed oxygen supplies to Indian hospitals, where oxygen shortages are causing a catastrophic increase in the number of casualties.

“Alarmed by the epidemiological situation in India”, EC President Ursula von der Leyen tweeted on Sunday. “We are ready to support. The EU is pooling resources to respond rapidly to India’s request for assistance via the EU Civil Protection Mechanism. We stand in full solidarity with the Indian people!”

In a similar message of solidarity, Chancellor Angela Merkel has declared that Germany is preparing an urgent support mission to India.

Experts attribute the explosive growth of cases in India to a new “double mutant” strain of the virus, the B.1.617 genome, which is currently appearing in some 15- to-20% of cases reported in Maharashtra, hardest-hit of the Indian states.

In parallel with the global show of support – the US and the UK also pledging emergency aid to India – the world’s countries are also increasingly taking precautions to prevent the new mutant strain reaching their soil.

The UK, US, Canada and Israel have banned travel to and from India. On Sunday, Italy took action, announcing plans to ban Indian passengers from arrival. Meanwhile, Germany’s Health Minister Spahn has announced that only German citizens would be allowed back.