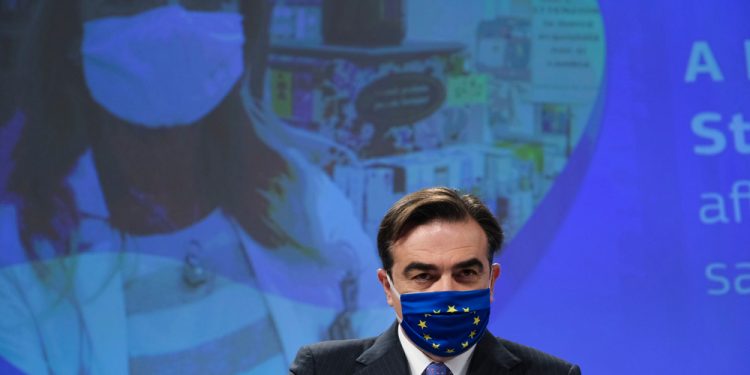 Brussels (Brussels Morning) The new EU pharmaceutical strategy was presented yesterday by the European Commission, promising a patient-centered vision, emphasizing access to and affordability of medicine.

Presented by the Health Commissioner Stella Kyriakides and Vice President Margaritis Schinas, the strategy was described as the “building blocks” of the EU and a great leap to “address persisting weaknesses”. Schinas defined this moment as “something akin of a small miracle, unimaginable five or 10 years ago”.

Kyriakides admitted that yesterday’s outcomes are a response to the “vulnerabilities of COVID-19”, but the Commission is “aware that access to medicines has long been a problem”.

The COVID-19 pandemic was an accelerator to the strategy delivered today, having brought to the surface a number of shortcomings, including clinical data limitation and manufacturing capacity.

By supporting industrial innovation, the Commission is betting on promising therapies such as improved personalised medicine, and gene and cell therapies. Emphasis was also placed on anti-microbial resistance (AMR), a condition that kills 33,000 patients per year due to the lack of efficient antibiotics.

Rare diseases and paediatric cancers have also been flagged for further research: “There are over 7000 known rare diseases, including rare cancers, of which 95% still have no treatment option,” reads the EU strategy.

Essentially, the new pharma strategy represents an overhauling of the current flawed system, with a focus on EU medicines — access and affordability — but also their placement on the market.

The Commission’s target for a legislative proposal is in 2022: “Concrete proposals will come through the next 2 years”, Margaritis Schinas said today, describing an “emerging reality” centered on more cooperation, coordination and centralisation.

The so-called milestone strategy was widely accepted by civil society and policy makers. However, the pharma industry association representatives called the “approach of addressing access and affordability [to medicines]” the “wrong strategy”.

“The strategy suggests destabilising and weakening incentives designed to support innovation in multiple areas including for medicines for rare diseases and children, as a way of addressing issues of access and affordability of medicines.

As well as being ineffective, it risks undermining the overall objectives of the strategy by creating uncertainty and accelerating the flow of life-science investment away from the EU to the US, UK and China”, said Nathalie Moll, the Director-General of the European Federation of Pharmaceutical Industries and Associations (EFPIA).

Despite the lack of encouragement from industry, civil society organisations expressed optimism.

‘’Everyone should have access to safe and effective treatment, at the right time and at affordable prices. Today’s strategy provides a solid basis for the EU and Member States to make this happen everywhere in Europe’,’ said Monique Goyens, Director General of the European Consumer Organisation (BEUC).

Asked whether the Commission had sufficiently consulted with member states, Marcel van Raaij, the Director of Pharmaceutical Affairs at the Ministry of Health in the Netherlands congratulated the strategy.

“It reflects all the discussions we had over the past years”, Raaij replied during a EPHA webinar, adding that member states, in particular the Netherlands, have insisted with the Commission about the need to work together.

“We had an important level of interaction before the strategy was finalised”, said Rui Santos Ivo, the president of the Portuguese medicines regulatory agency INFARMED. Santos Ivo affirmed it “represented an integrated approach identifying all major issues”.

In light of the upcoming Portuguese Presidency, Santos Ivo proposed to organise a conference dedicated to access to medicines to discuss policy developments and strategies ahead.

Concrete aspects of the strategy include a better reinforcement for both the European Center for Disease Prevention and Control (ECDC) and the European Medicines Agency (EMA) to deal with crisis management.

Also in the pipeline is the establishment of an EU Health Emergency Response Authority (HERA) by the end of 2021, the revision of regulations on rare diseases and paediatric and increased support to research and innovation via the Horizon 2020 and EU4Health funding programmes.

The pharma strategy delivered in 25 November collected previous general feedback from a public consultation that ran until September 2020.

The strategy will be discussed at political level at the Council Meeting on 2 December.