EU Ministers decide not to expand sanctions against Russia for now 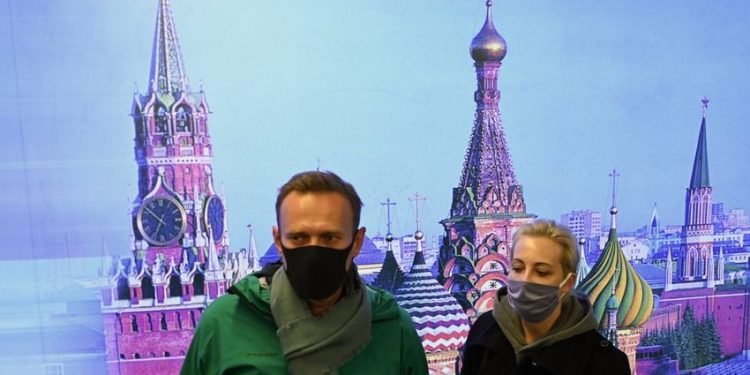 Russian opposition leader Alexei Navalny and his wife Yulia are seen at Moscow's Sheremetyevo airport upon the arrival from Berlin on January 17, 2021. - Russian police detained Kremlin critic Alexei Navalny at a Moscow airport shortly after he landed on a flight from Berlin, an AFP journalist at the scene said

Brussels (Brussels Morning) The EU will not implement new sanctions against Russia for the arrest of opposition figure Alexei Navalny and the repressive crackdown on the public protests that followed. Instead, it has decided it will wait to see what transpires in the trial that will determine whether Navalny remains in prison before addressing the issue of extending sanctions.

After yesterday’s Foreign Affairs Council meeting, EU High Representative Josep Borrell stated that the Council had condemned the arrest and the ensuing crackdown. He also announced that he will visit Russia in early February, where he plans to discuss “all relevant issues” with Russia’s Foreign Minister, Sergei Lavrov.

During the Council meeting, the Baltic countries, Italy and Romania called for immediate sanctions on Russian officials, but Germany’s Foreign Minister, Heiko Maas, pressed to give Kremlin more time. “We have agreed today to wait for the court’s decision, to wait to see,” said Maas said afterwards, while making it clear the matter is “not over”.

Following Monday’s joint declaration of the 27 EU member states that the bloc no longer recognises Juan Guaido as interim president of Venezuela, the Council reaffirmed its call made after the December 2020 elections urging the country to quickly find a political solution to end its current impasse.The EU now considers Guaido, the former head of the National Assembly who lost his position in the 2020 elections, a “privileged interlocutor”.

The Council also discussed relations with Turkey, taking note of the pending restart of the Greece-Turkey exploratory talk. Borrell cited the UN Convention on the Law of the Sea as the solid basis for addressing maritime disputes. The Council also affirmed the importance of restarting the UN-led Cyprus settlement talks, and indicated its willingness to participate as an observer.

Japanese Foreign Minister Toshimitsu Motegi joined the session via teleconference, and Borrell emphasised the EU 27 and Japan again recognised each other “as like-minded partners in a turbulent international environment, on all fronts.”

Debating escalating tensions in the South China and East China Seas, together with the developments in Hong Kong, the ministers discussed the urgency for Chinese and Hong Kong authorities to respect the rule of law, human rights and democratic principles.

The ministers agreed the need for more political pressure to help settle the dispute in the de-stabilised Horn of Africa using diplomatic and peaceful means.  Borrell announced that Finland’s Foreign Minister, Pekka Haavisto, is to travel to the region in early February as an Envoy of the EU, along with Special Representative Alexander Rondos.

The Council discussed climate and energy diplomacy with Executive Vice-President for the European Green Deal Frans Timmermans. Members noted the need for new foreign investment strategies if  current shares of renewable resources are to be increased.

Borrell cited how the European Investment Bank (EIB) is leading the way with its climate bank plans, and said that the EU will engage mainly with Africa, which will need to increase its energy consumption to increase the quality of life for its people, but must do so without increasing CO2 emissions.

The Foreign Affairs Council also touched upon the issue of cooperation with the United Kingdom in matters of common foreign and defence policy. Borrell pointed out that the UK does not want to negotiate any structured cooperation on these matters. The foreign ministers remain open to engage with the UK on any major global issues.

Borrell also commented on the UK decision not to extend full diplomatic status to the EU ambassador to the UK. The EU, he said, was not prepared to accept that the UK would be the only country in the world refusing to recognise the delegation of the EU as an equivalent of a diplomatic mission.

“It’s not a friendly signal,” Borrell said. “The first one the United Kingdom has sent to us immediately after leaving the European Union. If things have to continue like this there’s no good prospect.”