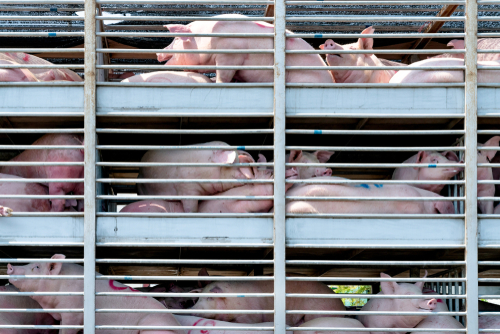 Belgium, (Brussels Morning Newspaper) Eight EU countries have warned Brussels against proposing a ban on exports of live animals, according to a new document.

The paper, written by Portugal and supported by France, Greece, Ireland, Latvia, Lithuania, Romania and Spain, will be discussed during a ministerial meeting on 30 January.

The group Compassion in World Farming says it “regrets that vested interests are once again thwarting efforts for a progressive reform to prevent the prolonged suffering of millions of animals.”

Olga Kikou, Head of Compassion in World Farming EU, said: “European citizens and progressive politicians need no convincing that long-distance animal transport and live exports are ethically unacceptable. Nonetheless, vested interests have managed to pull strings on some EU governments and are trying to thwart progress. This is very disturbing. We, NGOs, will shed light on this to make sure that ministers in these countries will take responsibility for their actions.”

Every year, millions of farmed animals are reportedly forced to endure journeys of hundreds, or even thousands, of kilometers. They are said to be crammed into vehicles, suffering extremes of temperature and often without sufficient food, water or rest. Many are injured or trampled to death.

Germany and Luxembourg have already prohibited the trade of live animal exports and together with the Netherlands, Sweden, Belgium and Denmark, have called  an EU-level ban on this.

Now, France, Greece, Ireland, Latvia, Lithuania, Portugal, Romania and Spain are opposing any bans on long-distance transport or exports to non-EU countries saying that “the primary objective of the revision of the [EU animal transport] legislation should […] not be focused on measures aimed at prohibiting or limiting certain types of transport.”

EU citizens have repeatedly called on the EU to ban live exports and long-distance animal transport. In fact, the vast majority of EU citizens, 94 pc as consulted by the Commission in 2021 and 2022) have said they favoured ending the live animal trade. EU ministers have a final say on EU laws, so it is crucial that citizens from these countries raise their voice over the coming months.

Compassion in World Farming campaigns for farm animal welfare and sustainable food and farming. With over one million supporters, we have representatives in 11 European countries, the U.S., China and South Africa.The European Commission is expected this year to present a legislative proposal to overhaul EU animal welfare rules, including regarding animal transport. The draft law will soon be ready for internal feedback and the revised proposal is expected for the end of September this year.