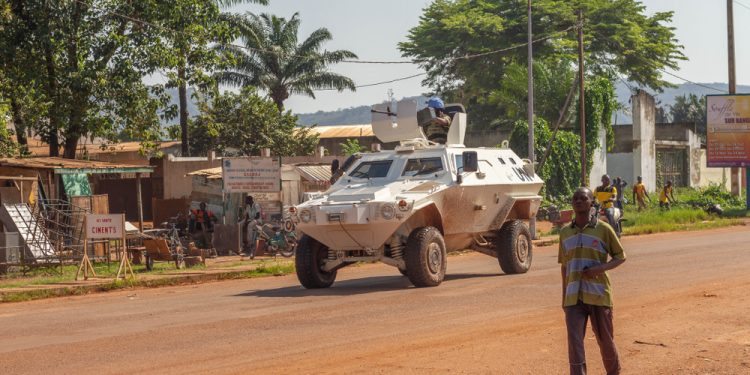 Brussels (Brussels Morning) The EU has joined in the call for a ceasefire in the Central African Republic (CAR), while the UN is declaring the situation is becoming calmer, France24 reports.

According to the UN MINUSCA peacekeeping force spokesman, Vladimir Monteiro, on Sunday, rebel forces are on the back foot, with no armed groups remaining in the town of Yaloke, which is situated on one of the routes to the capital of Bangui.

Armed groups have withdrawn from two other areas, he notes, and the situation is under control. However, unnamed security and humanitarian sources claim there are still elements of armed groups around Bossembélé, which is located about 150 kilometres from Bangui.

The government sounded the alarm about an attempted coup when three of the armed groups that control most of the CAR began moving along main routes leading to  Bangui, given that legislative elections are slated for 27 December.

On Sunday, the Coalition of the Democratic Opposition (COD-2020) issued a call for the elections to be delayed until peace and security are fully re-established. Meanwhile, the EU, the US, Russia, the World Bank and others have called on the armed groups to stand down, stressing that the elections should go ahead as planned.

UN Secretary-General António Guterres called for an end to hostilities to ensure peaceful and credible elections. CAR President Faustin-Archange Touadéra, who is expected to win re-election, noted on Saturday that “the national election authority and Constitutional Court have guaranteed that the elections will be held as scheduled.”

Until recently, the COD-2020 opposition was headed by former President François Bozizé. On Saturday, the government accused Bozizé of leading the armed groups then believed to be approaching the capital.

According to the government, the former president was at Bossembélé that day with fighters from the three armed groups that form the Coalition of Patriots for Change. The Coalition stressed the need to respect the integrity of the civilian population and to allow UN and humanitarian groups move freely around the country.