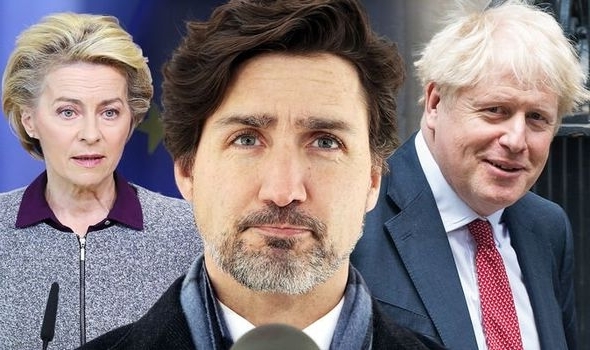 THE EU’s celebrated trade deal with Canada has been laid bare after a pro-Brexit organisation exposed Ottawa has faced a worsened situation since the UK historically voted to leave the bloc.

Facts4EU claims Canada’s trade deficit since signing its joint pact in 2016 with Brussels has worsened by 27 percent, to around -€17.5billion (-£16bn), while the deal will be severely hampered when the UK is finally removed from the bloc. When Canadian Prime Minister Justin Trudeau agreed the Comprehensive Economic and Trade Agreement (CETA), the trade deficit was at -€13billion (-£11.6bn), Facts4EU say. The organisation say the deal with the EU will become “a whole lot less” as Canada sold 43 percent of its goods to the UK, and that when Brexit is concluded it will not enjoy such high levels of trade.

They add that Canada’s deficit in services had also not improved, since CETA was approved.

Negotiations surrounding CETA were originally concluded in August 2014, two years before the UK’s referendum on its future within the EU.

The agreement is still ongoing and removes 98 percent of the preexisting tariffs between the bloc and Canada.

Commenting on its findings, Facts4EU said: “It would seem logical to try to do trade deals with the world’s largest economies, and to make these the key priorities.

“Unfortunately after more than 60 years of existence, the EEC/EU hasn’t managed to do a trade deal with the biggest and most powerful economy in the world.”

It added: “Instead of working hard and in good faith to negotiate a new trading arrangement with the UK, the EU has placed every conceivable obstacle (and quite a few inconceivable ones) in the way of achieving a successful outcome.

“This started in 2016 when it refused to have any discussions with the UK – not even informal ones. In the intervening years the number of artificial obstructions it has thrown up has been legion.”

The UK itself is currently embroiled in ongoing talks with the EU surrounding its own future trade relationships, but stumbling blocs have routinely been found between the two sides.

Rows surrounding the likes of the level-playing-field and the fishing industry have seen the parties appear far away from reaching any form of a deal.

After the UK officially left the EU on January 31, Prime Minister Boris Johnson and his team of Brexit negotiators now have until the end of the year to reach a conclusion.

If no agreement is struck, the UK will effectively exit Brussels’ customs union and single market and trade on World Trade Organisation terms.

Speaking during his regular press conference previously, the EU’s chief Brexit negotiator Michel Barnier said: “Too often this week it felt as if we were going backwards more than forwards.

“Today, at this stage, an agreement between the EU and UK seems unlikely. I simply do not understand why we are wasting valuable time.”

The next round of negotiations will begin in London on tomorrow (September 7).