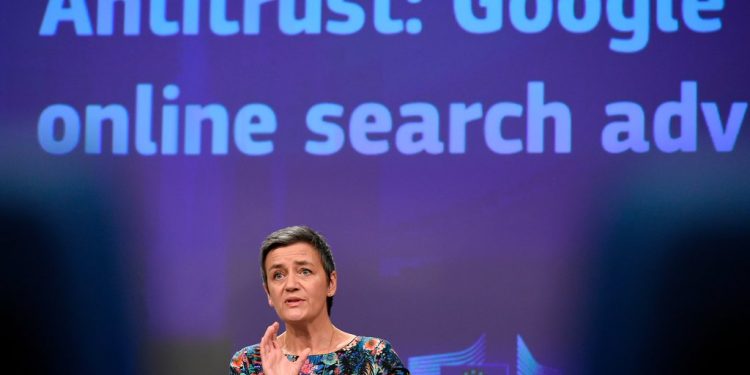 Google’s market dominance has solidified in the three years since the EU fined the tech giant and ordered it to stop favouring its price comparison service, according to a study of 25 of Google’s rivals, Reuters reports Monday.

After the EC hit Google with a fine of 2.4 billion euros, the company offered to allow competitors to bid for top ad spots on its search pages. Google’s rivals criticized the proposal as ineffective and called on the European Commissioner for Competition Margrethe Vestager to sanction Google for non-compliance.

Thomas Höppne, an adviser to several of Google’s rivals, stressed that Google’s proposal strengthened the company’s position on national markets. This was not because the EC imposed the wrong remedy, he said, but because Google’s compliance mechanism does not comply with the remedy. Höppner concluded that the EC should warn Google for non-compliance or otherwise force the company to come forward with a more effective solution.

The EC noted it was keeping an eye on the market to assess the effects of Google’s proposal, whereas Google claimed the study ignores some of the facts and the intention behind the EC decision.

Google’s recent auction results show Microsoft as the main winner on European markets, with the privacy-focused search engine DuckDuckGo claiming that it had been priced out of the auction, according to a CNBC report on Tuesday. DuckDuckGo noted that its commitment to privacy means less money per search, which is why the company cannot bid as much compared to profit-maximizing competitors.

The current remedy, it argued, has been manipulated by Google to benefit Google. DuckDuckGo pointed out that the EC has said it is waiting on data in order to act, which is why Google’s rivals had decided to provide the EC with their study showing how Google is shutting out its competitors.

Google has asserted that the auction process is designed to ensure that no search engine is prioritized over another.

Thus far, the EU has hit Google with three anti-trust fines totalling more than US$ 9 billion in total. Google is contesting all three. After conducting an anti-trust investigation against Google, the US Department of Justice is preparing a lawsuit against the company for favouring its own businesses in search results.