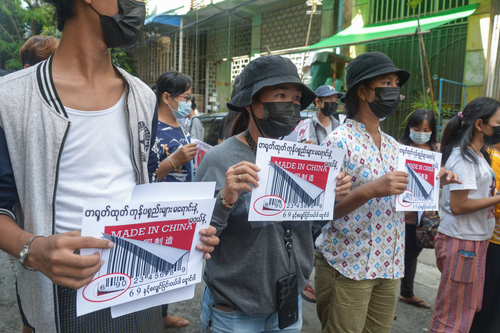 Brussels (Brussels Morning) The EU has expanded its sanctions against the military leaders of Myanmar’s junta, as well as against companies controlled by the military, ahead of a regional meeting scheduled to discuss the growing humanitarian crisis in the country caused by the 1 February military coup, AP reports.

“Today’s decision is a sign of the EU’s unity and determination in condemning the brutal actions of the military junta, and aims at effecting change in the junta’s leadership”, an EU Council statement declared in announcing the expansion of sanctions. “Today’s decision also sends a clear message to the military leadership: continuing on the current path will only bring further suffering and will never grant any legitimacy”, the statement added.

The most recent wave of EU sanctions includes the addition of 10 more individuals reportedly responsible for undermining democracy and the rule of law, cited for repressive decisions and for serious human rights violations. The new additions, all previously sanctioned by the US, Britain and other governments, raise the total number of individuals under EU sanctions in Myanmar to 35.

The sanctions also extend to two companies – – Myanma Economic Holdings Public Company and Myanmar Economic Corp —  both of which reportedly have vast holdings within the country, and are helping to fund its military and their leaders.

More than 738 protesters and bystanders have been killed so far in the less than three months since the coup was staged, a local NGO reports. More than 3,200 people have been detained, mostly pro-democracy politicians, activists, intellectuals and artists, in addition to the deposed civilian leader Aung San Suu Kyi and President Win Myint.

Despite repeated pleas by UN Secretary-General António Guterres, the Security Council has yet to act and stop the violence, most likely because such a move would be blocked by both China and Russia.