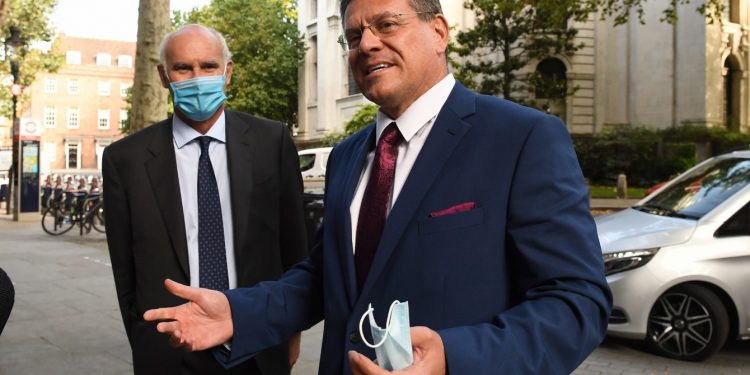 Sefcovic was speaking after the third joint EU-UK committee meeting Monday in Brussels.

The meeting follows several concerns the EU has had with the UK’s handling on preparing for after the transition period ends on 31 December.

While the EU and its members states were on target to ensure the rights of UK nationals were safeguarded through resident schemes; and while “acknowledging efforts to register all EU citizens” in the UK, Sefcovic said he had raised concerns with Gove over the UK settlement scheme granting new resident status.

“In practice, it distinguishes between different categories of EU citizens with the same residence status”, he said, “it undermines legal certainty, also affecting their rights. We cannot have two classes of beneficiaries of the Withdrawal Agreement”.

The Vice-President of the European Commission for Interinstitutional Relations also iterated the urgency in putting in place measures to implement the Protocol on Ireland/Northern Ireland, including sanitary and phytosanitary controls, customs-related IT systems, and the registration of Northern Irish traders for the UK’s tax scheme.

Sefcovic acknowledged the UK’s engagement on some of the Joint Committee decisions, but noted, “Many difficult issues remain, and the UK’s positions are far apart from what the EU can accept”.

This included a recent draft bill on Britain’s internal market that overrides parts of the withdrawal agreement and places at risk a crucial peace agreement for Ireland and Northern Ireland.

“We maintain that the Bill, if adopted in its current form, would constitute an extremely serious violation of the Protocol, as an essential part of the Withdrawal Agreement, and of international law”, he said.

“It cannot be stressed enough that the Protocol is specifically designed to protect the Good Friday (Belfast) Agreement and the achievements of the peace process, including avoiding a hard border on the island of Ireland.

The committee’s next meeting is expected to take place in the first half of October.