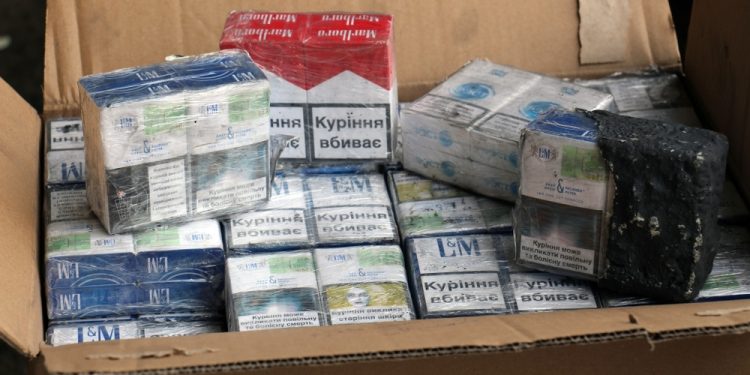 Close-up of smuggled cigarettes packs, which were specially disguised as charcoal briquettes and transported to Europe across the Ukrainian-Polish border

Brussels (Brussels Morning) EU and UK law enforcement authorities joined forces in November to dismantle a cigarette smuggling chain, according to a just released report by the EU Commission.

Authorities from 15 EU member states and the UK coordinated efforts with Europol and the EU Anti-Fraud Office (OLAF) in a joint operation from 2 to 13 November that culminated in the arrest of 17 smugglers.

British HM Revenue and Customs and Lithuanian Customs and Criminal Service analysed excise duty suspension data to trace the smugglers and led the operation that resulted in the seizure of 67 million cigarettes and 2.6 tonnes of tobacco. The vast majority of seized cigarettes, about 88%, were manufactured in Belarus.

Authorities made the largest seizures in Lithuania (28.75 million cigarettes), followed by the UK with 9 million, Poland with 6 million, Ireland with 3.5 million, Romania with 2.2 million, Latvia with 740,000, Sweden with 500,000, and Croatia with 150,000. In addition to cigarettes, authorities seized ten vehicles used in the smuggling operation in eight of the participating countries.

Smugglers abused the duty suspension mechanism, placing cigarettes on the black market without paying taxes and duties, at an estimated cost to tax and customs authorities of 30 million euro.

OLAF Director-General Ville Itälä attributed the successful outcome to cooperation and coordination among the customs authorities, noting how “the cross-border nature of this illegal trade makes it hard for countries to combat on their own, and this is where OLAF and Europol bring real added-value.”

He congratulated all who had participated in the joint operation, observing that “we have once again helped protect the financial interests of the EU and its citizens.”

The EU member states that took part in the operation are Belgium, Croatia, Cyprus, Denmark, Estonia, Finland, Hungary, Ireland, Latvia, Lithuania, Poland, Romania, Slovenia, Sweden and the Netherlands.Europol helped member countries with cross-border communication and information exchange as well as in organising meetings and with analytical support. OLAF helped ensure the secure exchange of information between the authorities concerned as well as by monitoring  and crosschecking the information.