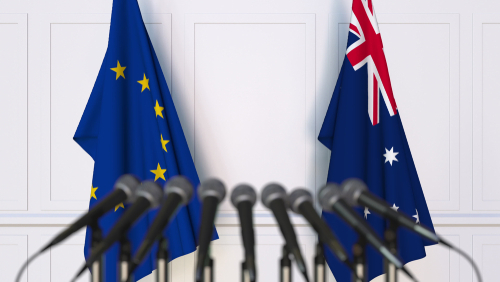 Brussels (Brussels Morning) A long-awaited round of trade talks between Australia and the EU was postponed on Friday, following a row between Canberra and Paris over Australia’s cancellation of a French submarine production contract.

Envoys from EU and Australia were set to meet on 12 October, for the 12th round of mutual talks on a planned trade deal between the two sides. The agenda was expected to cover a range of issues, running from trade and services, to investment and intellectual property rights.

However, the meeting was postponed abruptly with an EU official in Canberra confirming that the next round will take place a month later than originally planned. France, which recently withdrew its ambassador from Australia because of the submarine controversy, had since questioned the feasibility of an EU-Australia trade deal given what Paris views to be a lack of trustworthiness on Canberra’s side.

The row between Australia and one of the most influential EU members came about as a result of Australia joining a trilateral defence treaty with the US and the UK. Known as the AUKUS,  the military pact will see the UK and the US assist Australia in constructing a fleet of nuclear-powered submarines. This entailed Canberra scrapped its existing 40 billion dollar contract with the French Naval Group for construction of 12 conventional submarines.

For France, a major problem was that it had neither been informed nor consulted about the change ahead of the pact being announced. Moreover, Australian officials had assured the French mere days before the contract was scrapped that their mutual partnership would continue.
Athough Australian Prime Minister Morrison expressing understanding for France’s disappointment, he offered no apology even as Paris withdrew its ambassador. He claimed that France had been well-informed that the contract might be abandoned. French diplomats, au contraire, insist they were given no warning — not at any point.