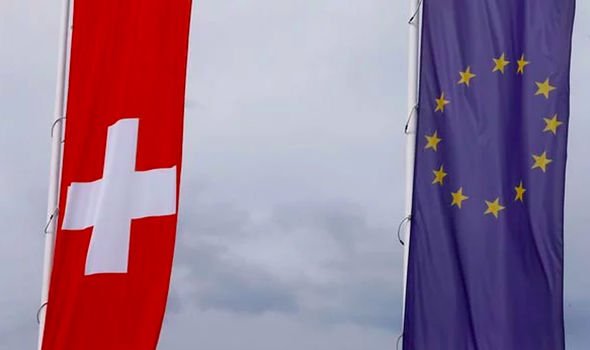 SWITZERLAND could be about to follow in the footsteps of Britain and have their own “Brexit moment” as the Central European country holds a critical referendum on its relationship with the EU.

The Swiss will head to the polls on September 27 to decide whether or not the country should abandon a deal between Switzerland, which has always resisted the temptation to join the EU, and the Brussels bloc guaranteeing free movement between the two. The referendum to abolish free movement of EU citizens across Switzerland has been billed as Bern’s “Brexit moment”.

Such a decision would be a bitter blow to Brussels in the aftermath of the UK’s decision to leave the trade bloc.

Under the plan backed by the far-right Swiss People’s Party, Switzerland’s freedom of movement accord would either be renegotiated with Brussels within the next 12 months or scrapped altogether.

Critics have warned bilateral trade agreements between Switzerland and the EU could be at risk if the Swiss vote against freedom of movement.

In total there were 2.1 million immigrants living in Switzerland in 2019.

The Swiss government is calling for citizens to reject the plans to scrap free movement, warning it would have “serious consequences for jobs and the prosperity” of the nation.

A statement said: “The initiative calls for an end to the free movement of people with the EU.

“Its acceptance would have serious consequences for the jobs and prosperity of our country, and at a time when the economy needs stability and prospects.”

ACLI President Giuseppe Rauseo said: “If the initiative wins, the Agreement on the free movement of people between the Swiss Confederation and the EU, which regulates the lives of more than 1.7 million people in Switzerland, would be abolished with serious consequences in terms of loss of rights.

“Without the agreement, we would go back in time and many people, including the numerous Italian citizens in Switzerland, would find themselves in a situation of dramatic economic and social precariousness.

“The initiative would affect male and female workers, families, students and even minors.

“The victory of the initiative would also mark a break in the bilateral agreements with the EU, isolating Switzerland from Europe.

“The economic consequences of such a step, as numerous studies on the subject illustrate, would be very serious and would bring unprecedented political and social instability to the country.

“University education and research, Swiss flagships, would for example be brought to their knees due to the termination of the bilateral agreements.

“If the Federal Council recommends rejecting the initiative, it is because the cancellation of the agreement would, in fact, amount to a Swiss Brexit,”

Switzerland’s relationship with the EU is a complex one.

Switzerland is not a member state of the bloc but it is associated with Brussels through a series of bilateral treaties.

According to the preamble of the EU decision ratifying the agreements: “The seven agreements are intimately linked to one another by the requirement that they are to come into force at the same time and that they are to cease to apply at the same time, six months after the receipt of a non-renewal or denunciation notice concerning any one of them.”

The EU-Swiss relationship is currently governed by 120 bilateral economic accords, which are set to erode over time if they are not updated.