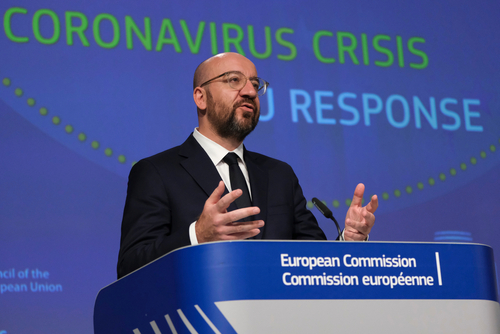 Belgium, (Brussels Morning Newspaper) EU Council President Charles Michel laid out the May summit agenda in a letter to Council members ahead of the special meeting.

He pointed out that the discussion will be focused on the conflict in Ukraine, defence, food security and energy, adding that Ukraine has stood up to Russian aggression admirably, the Council notes in a statement.

Michel reminded that the EU has been supporting Ukraine financially, militarily and politically since the start of the war, stressing that the bloc will continue to provide humanitarian aid and exert pressure on Russia.

He expressed belief that unity is the EU’s strongest asset and pointed out that it is the bloc’s guiding principle.

Commenting on the coming meeting, Michel reminded that Ukrainian President Volodymyr Zelenskyy will join it via video link and added that the Council is focused on “assisting the Ukrainian state, along with our international partners, with its liquidity needs.”

He reiterated that the bloc will discuss plans to support reconstruction of Ukraine after the war is over, stressing that this will be a global effort.

“We will come back to the issue of energy including high prices, which are hitting hard on our homes and businesses,” Michel announced.

He stressed the importance of speeding up the energy transition with the aim of weaning the bloc off Russian energy imports as soon as possible. “Building on our decisions taken in Versailles, we will discuss the best ways to take work forward,” Michel stated.

He expressed concern that the war in Ukraine will have severe effects on global food security, pointing out that food prices are rising and warning that it could lead to destabilisation and risk of famine in some parts of the world.

“At our meeting, we will discuss concrete ways to help Ukraine export its agricultural produce using EU infrastructure,” Michel noted and added “we will also see how to better coordinate multilateral initiatives in this regard.”

He revealed that the war in Ukraine bolstered the Council’s ambition to strengthen European defence, reminding that the body called on the European Commission and the European Defence Agency to make analyses and propose solutions.