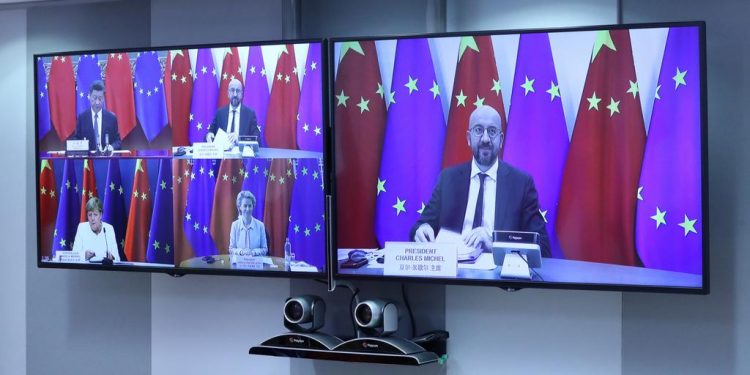 The virtual EU-China summit yielded little by way of results, with EU leaders expressing dissatisfaction over China’s authoritarianism and human rights abuses yet achieving nothing substantive, according to a DW report, Tuesday.

Before the summit, EU leaders had condemned the so-called Xinjiang Vocational Education and Training Centres, the oppression of Muslims, human rights violations and the erosion of freedoms in Hong Kong plus the lack of reciprocity in trade for EU companies before the summit. Despite this, China was happy with how the summit went.

EC President Ursula von der Leyen asserted that the EU was very serious about the issue of fair access to China’s market. China,she said, had to convince the EU that an investment agreement is worth having. Germany’s Chancellor Angela Merkel criticized China over the camps in Xinjiang and the authoritarian crackdown on Hong Kong, but she also devoted considerable time on the issue of German exports to China.

While the US is imposing tariffs on China over violations of human rights and is banning Chinese products made by forced labour in Xinjiang camps, the EU’s response to China’s growing authoritarianism has been limp at best. This is partly the result of China’s successful divide and rule approach to the EU and its member states, with Beijing often striking bilateral deals with the economically less stable EU member states including Greece and Italy.

Fraser Howie, a former banker and the author of several books on China’s financial system, observed that the virtual summit had yielded virtual results. The EU may have engaged in dialogue with China, he noted, but it has nothing to show for it. Merkel, for example, had failed to wring any concessions from China leading him to predict that her political career would have ended before there is a China-EU Comprehensive Agreement on Investment (CAI).

DW points out that China does not appear to care about EU rhetoric or criticism, that China’s President Xi Jinping had brushed talk of human rights violations by saying that the Chinese Communist Party opposes meddling in China’s internal affairs. Moreover, according to the President, China would not take lessons on human rights, asserting that the country opposes double standards.

Speaking to reporters after the virtual summit, EU Council President Charles Michel said that the EU wants more fairness and reciprocity in trade.