EU Chamber warns about loss of confidence in China 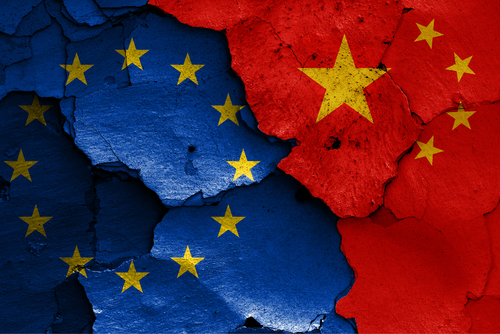 flags of EU and China painted on cracked wall

In a paper published on Wednesday, the EU Chamber pointed out that confidence in China as an investment destination is eroding largely due to Beijing’s inconsistent implementation of rules, according to Reuters reporting.

As case in point, the NGO pointed to China’s “inflexible and inconsistently implemented” policies aimed at curbing the spread of coronavirus.

It stressed that some 1,800 NGO member companies contributed to the paper and proposed 967 recommendations for EU companies with business ties to China, the EU and Beijing.

Some of the recommendations for China are to refrain from “erratic policy shifts,” strengthen cooperation with the EU and increase the number of international flights.

One of the recommendations for the EU is to engage with Beijing proactively and reject calls for economic disengagement.

Jörg Wuttke, head of the EU Chamber, pointed out at a press conference that China has been turning inward over the past year, while most other countries pursued globalisation.

Commenting on China’s strict zero-COVID policy, he noted that “the world lives with herd immunity and China waits until the world gets rid of omicron, which is of course unlikely.” China’s health policies resulted in frequent lockdowns and largely kept border closed to international travel.

According to Beijing, its strict policies are necessary to prevent unacceptable loss of life and make sure the healthcare system is not overwhelmed.

The EU Chamber also criticised China for increased politicisation of business, lack of reforms in Chinese state-owned companies, restrictions that prevent Chinese staff from travelling abroad and an exodus of Europeans, which erode China’s attractiveness as an investment destination.

It warned that, as a result, record numbers of companies are seeking to move planned investments out of China.

A US business lobby warned last month that Beijing’s strict policies have become the main concern of US businesses operating in China, overtaking poor relations between the countries.

Wuttke expressed hope that China will relax some of its policies after the Chinese Communist Party (CCP) holds its quinquennial congress slated for 16 October.

Tags: confidence in ChinaMain-Slider
No Result
View All Result