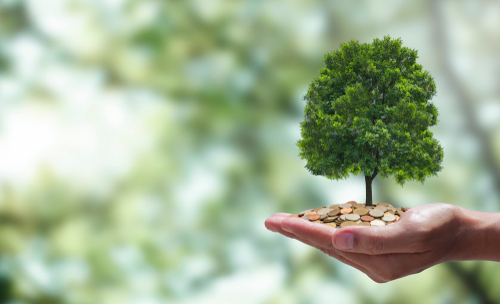 Planting trees on the hands of women and coins on men's hands. Concepts that are not worth exchanging, money and trees, tree planting campaigns. To preserve the world. Investment in business

Brussels (Brussels Morning) Jos Delbeke, who headed the development of the EU’s carbon market, has warned the European Commission against making radical changes to the scheme, Reuters reported on Wednesday.

“I would say, don’t spoil the game”, Delbeke said, in cautioning that “if you are too radical in your review of the market stability reserve (MSR), you may kill the confidence that the market is showing today”.

It was important to take a light-touch approach, he observed, a marked contrast in approach to that of the EC, which announced major changes to the carbon market aimed at speeding up the bloc’s green transition.

EU carbon prices reached 44 euro per tonne of CO2 this month, a jump of more than 40% since December last year, when bloc leaders agreed to more ambitious environmental targets.

According to analysts, carbon prices should continue to rise.

The MSR was put in place to prevent the accumulation of excess permits in the carbon market since this could drive down prices. Once the number of spare permits exceeds 883 million, the MSR automatically reduces the total by 24%.

The proposed mechanism is to remove 12% of permits when the threshold is exceeded starting in 2024.

Delbeke pointed out the bloc should think about keeping the removal rate at 24%, but warned that lowering the threshold could prove problematic for companies that want to hedge their exposure in the future.

The EU lowers the amount of permits in the system each year to make sure greenhouse gas emissions keep going down.

The EC has announced plans to cut the number of permits faster with the aim of achieving more ambitious climate goals, stressing that the move is an important part of coming reforms.

It also proposed the introduction of a minimum price for carbon emissions, which France and Germany support.

Delbeke predicted the proposal will not get support from EU member states and added it would put the bloc on a “difficult political journey”.