EU calls out China for endangering peace in Spratly Islands 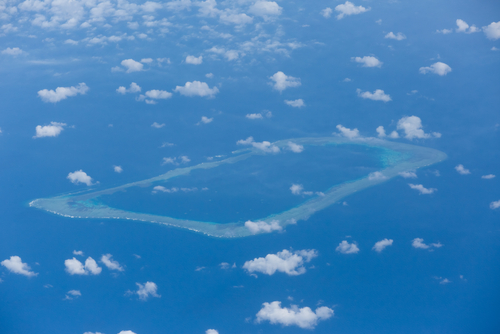 Aerial view on the The Spratly Islands,one of the major archipelagos in the South China Sea,Philippines

Brussels (Brussels Morning) The EU accused China of endangering peace in the South China Sea on Saturday, and urged all parties involved to abide by a 2016 international tribunal ruling which rejected most of China’s claims to reefs and islands in the disputed Spratly Islands archipelago, but which Beijing has refused to accept, Reuters reported.

The Philippines launched a fresh diplomatic protest against Beijing on Friday, demanding the withdrawal of an ostensible fleet of fishing boats from around the disputed Whitsun Reef, a small atoll within the archipelago, which the 2016 Permanent Arbitration Court ruling placed firmly within the Philippines’ Exclusive Economic Zone.

The flotilla of fishing vessels gravitating near the reef – as many as 220 vessels at times – is considered a threat by Manila. The more so because in the past China has used similar tactics to establish its claims to disputed islands. US intelligence believes such fleets of questionable fishing vessels are actually China’s unofficial “maritime militia”, a naval force used to maintain plausible deniability in the event of direct confrontation.

Similar “fishing fleets” were used in the past to claim other islands within the Spratly Islands chain. They were to be seen later performing significant reconstruction with dredgers and constructing military facilities on the artificially expanded islands. The first such example –  Mischief Reef – originally a small coral atoll in 1995, today houses a military airbase with a 2.7-kilometre runway, anti-aircraft batteries and naval and air control radars.

The Chinese “fishing fleet” in the Spratly Islands dispersed and withdrew from Whitsun Reef when four Phillipines’ naval vessels headed for the reef, emboldened by the presence of the US aircraft carrier Theodore Roosevel’s strike force, together with US amphibious carrier Makin Island in the South China Sea area.

US Secretary of State Antony Blinken confirmed on 8 April that any attack on ships or airplanes belonging to the Philippines – whether military or civilian – would activate the two countries’ mutual defence treaty. His remarks clarified the previously ambiguous US administration position as to whether Washington would intervene in conflicts started outside of territorial waters.

Even though the Chinese fleet dispersed, the ships remained within the Spratly Islands, temporarily taking refuge at Gaven Reef – another of the archipelago’s islands occupied by China, and converted into a military base. A smaller number of ships remained near Whitsun.
“Tensions in the South China Sea, including the recent presence of large Chinese vessels at Whitsun Reef, endanger peace and stability in the region”,  an EU spokesman said in a statement on Saturday. The Chinese Mission to the EU responded on Saturday by reiterating that Beijing considers the reef a part of China’s Nansha Islands – the Chinese name for the Spratlys. Yet again, it rejected the 2016 Arbitration Court ruling as “null and void”.