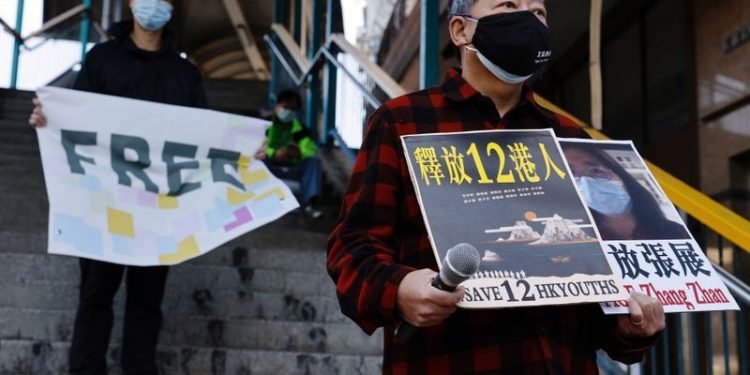 Pro-democracy supporters protest to urge for the release of 12 Hong Kong activists arrested as they reportedly sailed to Taiwan for political asylum and citizen journalist Zhang Zhan outside China's Liaison Office, in Hong Kong, China December 28, 2020

Brussels (Brussels Morning) The EU has called on Beijing to release Zhang Zhan, the citizen journalist jailed on Monday for her reporting on China’s handling of the coronavirus pandemic, while also appealing on behalf of a number of other detained human rights advocates, attorneys and reporters, DW reports.

The appeal comes just ahead of the signing of the EU-China investment deal, an event that has triggered renewed condemnation of China’s human rights violations.

In a statement, EU spokesman Peter Stano points out that Zhang had been reporting on the pandemic in Wuhan before being detained. “According to credible sources, Zhang has been subject to torture and ill-treatment during her detention and her health condition has seriously deteriorated,” he said. It was vital that she have adequate medical care, he added.

According to her attorney, Zhang was jailed for “picking quarrels and provoking trouble,” a crime under Chinese law.

Brussels officials are negotiating an investment deal with China, which is due to be signed this week. The prospect has led some MEPs to express concern about how this will send the wrong message about human rights.

Today, China’s Ministry of Foreign Affairs indicated it was hopeful the deal could be wrapped up “at an early date.” Negotiations between the bloc and China, which started in 2014, have been blocked for years.

Bloomberg , citing the South China Morning Post, reports that Zhang was convicted on Monday at the Shanghai Pudong New Area People’s Court and sentenced to four years in prison.

After the government was accused of covering up the severity of the coronavirus outbreak, the Chinese Communist Party (CCP) tried to represent its response as compassionate and competent. The verdict against Zhang marks the latest effort by the CCP to come down hard on those who were critical of the official response to the virus.

Initially, Chinese authorities also condemned Li Wenliang, the Wuhan doctor who had voiced alarm when warning about the coronavirus outbreak. Officials later acknowledged his role and sought to reframe him as a martyr, rather than an oppressed whistleblower. Beijing also launched investigations against others who had reported critically on the CCP’s response to the outbreak.

On Sunday, Human Rights Watch warned about a spike in the number of journalists currently in detention in China.