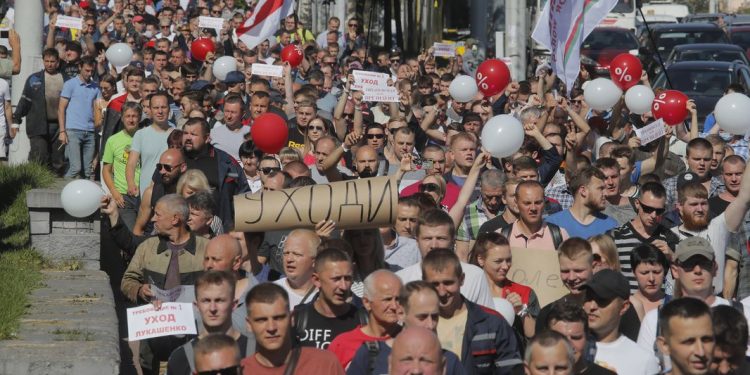 EU leaders have been called to an emergency meeting on Belarus, as tens of thousands of protesters gathered in Minsk for the largest rally in the country’s recent history.

The president of the European council, Charles Michel, has invited the European Union’s 27 heads of state and government to an extraordinary meeting by video conference on Wednesday. “The people of Belarus have the right to decide on their future and freely elect their leader,” Michel tweeted. “Violence against protesters is unacceptable and cannot be allowed.”

The decision to call an EU summit – an idea deemed unlikely in Brussels just one week ago – reflects the rapid pace of events in cities across Belarus, after the embattled autocrat Alexander Lukashenko urged Vladimir Putin to save his regime over the weekend.

EU officials said the situation was evolving quickly and the union wanted to send a message of solidarity to the people of Belarus. “What we have seen in the last 24 hours or a little more is obviously a completely new dynamic,” said Joerg Forbrig, director for central and eastern Europe at the German Marshall Fund thinktank. “The EU needs to take this to a higher level.”

He said: “The EU needs to make it very clear to Russia that there are ways of resolving this peacefully. It needs to make it absolutely clear that the Russian appearance in this situation, or even an invasion in Belarus of some sort, would carry consequences.” The analyst suggested the EU needed to step in with an offer of conducting dialogue that includes Russia, via the Organisation for Security and Cooperation in Europe.

The OSCE, a body that counts EU member states and Russia as members, said it was not invited to monitor the latest elections in Belarus.

The German government, which currently holds the EU’s rotating presidency, on Monday called for a “national dialogue” between the government and opposition to overcome the crisis. The German government’s spokesman, Steffen Seibert, suggested the OSCE could play a role with “a review of the election”. Describing the mass demonstrations across Belarus as “impressive” and “moving” Seibert said: “These people should know that Europe stands by them.”

Sanctions are unlikely to be agreed until the end of next week at the earliest. One EU diplomat said the “time-consuming” process of agreeing a list could take at least a month or more.

On Monday the UK foreign secretary, Dominic Raab, added his voice to support sanctions. Raab said the UK did not accept the results of the presidential election and called for an independent investigation “into the flaws that rendered the election unfair, as well as the grisly repression that followed”. He said the UK would “work with our international partners to sanction those responsible, and hold the Belarusian authorities to account”.

The UK is obliged to enforce all EU sanctions until the end of the year under the terms of the Brexit-transition agreement.

Meanwhile the largest political forces in the European parliament – representing 80% of MEPs – called for new and free elections under the supervision of independent monitors. “The 9th August presidential elections were neither free, nor fair, and credible reports point to a victory of Svetlana Tikhanovskaya,” said the statement signed by leaders of the centre-right European People’s party, the Social Democrats, centrist Renew Europe, the Greens and the European Conservatives and Reformists. “We therefore do not recognise Alexander Lukashenko as the re-elected president of Belarus and consider him a persona non grata in the European Union.”

While the European parliament has few foreign policy levers, it can help set the EU agenda. The groups called on the EU to appoint a high representative to Belarus to support a peaceful and democratic transition of power, as well as relaunch EU financial programmes aimed at Belarusian people.