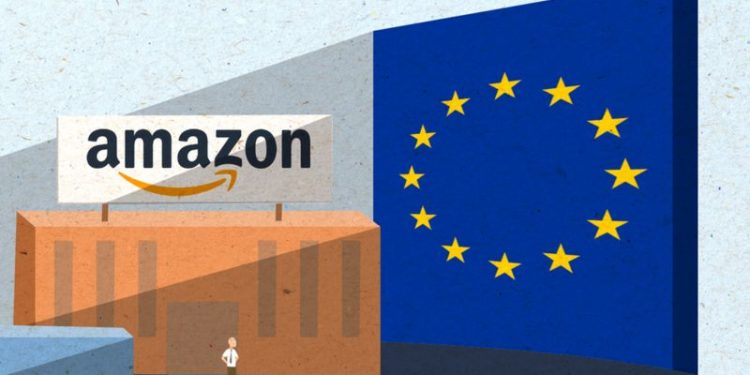 Brussels (Brussels Morning) Amazon’s use of its Prime label and the company’s use of its marketplace to push third-party vendors into using its own services has caused the Commission to start formal competition investigations.

“Amazon has completely distorted the online market”, exclaimed Commissioner Margrethe Vestager in Brussels Tuesday. The Commissioner announced an investigation into Amazon’s e-commerce practices and another query into its business practices.

The view is that Amazon has breached EU antitrust rules by distorting competition in online retail markets. Amazon’s retail business relies on information that it gathers by its function as marketplace and therefore has access to data on small and medium-sized companies’ as vendors.

The information is used to further Amazon’s own retail business, according to the Commission. The other issue is the services that Amazon offers, where again the company gives preference to its own offers and those sellers using its logistics and delivery services.

“We do not take issue with Amazon’s success, but our concern is the business conduct, which distorts competition”, Vestager explained.

The Commission has analysed data samples of 80 million transactions listed on European marketplaces. The investigation showed that data relating to third-party sellers listings and transactions on Amazon’s sales platform were fed into Amazon’s own retail business data in realtime, which gave the company direction on which product offers to launch.

Amazon’s retailers can then draw conclusions from that data, identify products of interest and avoid risks by using the data it has access to. The Commission notes that Amazon only lists minor shares of products but still gets the biggest shares of transactions in most categories.

While listing less products per category, the Amazon retailers still make more than half of revenues per section of items. The use of data then allows to focus on the share of best products, which marginalises other sellers and captures their sales.

“This is all about e-commerce business practices”, Margrethe Vestager stated. “Amazon may have rules favouring its retail offers using their own logistics and delivery services and we are investigating these practices.”

The Commission also opened a second formal antitrust investigation into the possible preferential treatment of Amazon’s own retail offers and those of marketplace sellers that use Amazon’s logistics and delivery services.

A particular issue is Amazon’s market dominance in providing distribution and logistics services in France and Germany, which are the company’s biggest markets in Europe. This could amount to abuse of dominant market position in anti-trust parlance.

Another issue is Amazon’s Buy Box that shows the offer a single seller for a certain product and that generates most sales, up to 70% in France and 80% on German Amazon.

“Customers should not be locked into Amazon’s services”, Vestager said. As it is, Amazon’s Prime customers spend more and reaching those consumers is imperative since the Prime label generates more sales and bigger revenue.

“We need regulation to define the marketplace and we have to define a set of obligations”, Vestager continued with reference to the Digital Services Act that the Commission will present in December. She would not elaborate on whether this is the type of practice that will be banned under the new legal act.

“Amazon has been forthcoming in solving the issues at stake”, she contended.

The Amazon investigations add to the Commission’s previous action taken to tackle  aspects of Google’s and Apple’s market dominance, respectively. Both cases have lead to appeals to the European Court of Justice. Regarding any moves on Facebook, the Commissioner was evasive:

“We are still attempting to understand how the social media and applications work on Facebook. We need to move on and get data to do an analysis”, Vestager said.

It is still unclear what will follow from the Digital Services Act; it will be aimed at platforms effectively controlling the markets they operate in, whether that is by providing marketplaces, applications, social networks or search engines.

Tech companies may be banned from some practices and could be forced to make data they gather public or accessible to other companies. It seems that the Commission will establish specific powers to intervene in the European segment of the data market.