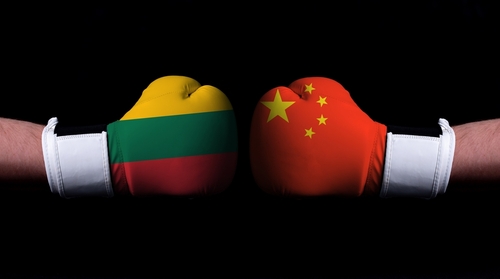 Lithuania recalled its diplomats from China

Belgium, (Brussels Morning Newspaper) The EU has brought the dispute between China and Lithuania before the World Trade Organization (WTO) on Thursday.

The bloc accuses China of implementing discriminatory practices against Lithuania, stressing that this threatens the EU’s single market, Reuters reports.

China is pressuring multinational companies to sever ties with Lithuania or lose access to the Chinese market over the Baltic EU member state’s decision to allow Taiwan to open a de facto embassy there.

Beijing insists that the dispute is political and not economic, claiming that Lithuania is trying to “hijack” relations between the EU and China. The Chinese Communist Party sees Taiwan as part of China’s territory.

The EC pointed out in a statement that China’s move is causing damage to exporters in Lithuania and other bloc members.

It added that China is refusing to clear goods from Lithuania through customs, rejecting import applications from the country and pressuring exporters in the EU to remove Lithuanian-made goods from supply chains when they export to China.

The Commission stressed that diplomatic attempts to resolve the issue have failed and added that China’s moves appear to clash with WTO rules.

European Commissioner for Trade Valdis Dombrovskis noted that the EC is still pursuing diplomatic efforts and stressed “the EU is determined to act as one and act fast against measures… which threaten the integrity of our single market.”

“Certainly, there can be a diplomatic solution, he added and concluded “from the EU side… we are trying to solve the dispute amicably, there are two parallel tracks.”

Cases brought before the WTO start with a two-month consultation period during which the parties can try to resolve the dispute. If they do not succeed, the EU can call on the WTO to rule in the case, which usually takes about two years.

Beijing reiterated that its spat with Lithuania is political and asserted that its actions are in line with WTO rules. Zhao Lijian, Chinese Foreign Ministry’s spokesman, noted at a press conference “we reminded the EU to… be wary of Lithuania’s attempt to hijack China-EU relations.”

Two sources say that Lithuania is thinking about asking Taiwan to rename its de facto embassy in Vilnius. Taiwan pointed out that it did not receive a request to rename the embassy.