EU begins to lay out conditions for engaging with Taliban regime

by Lailuma Sadid
in EU Institutions 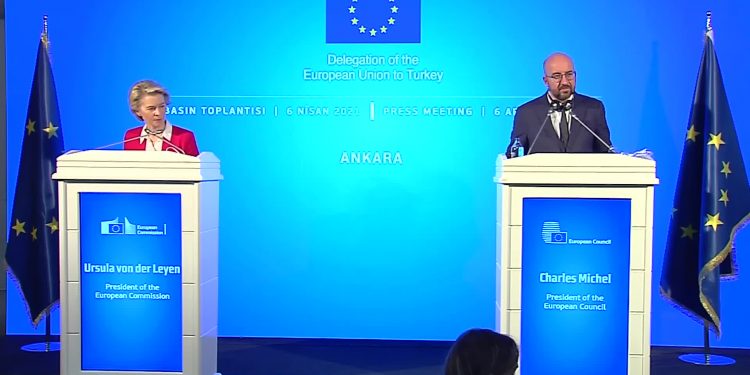 Brussels (Brussels Morning) In a press conference following Tuesday’s virtual G7 meeting on the Afghan evacuation, European Council president Charles Michel and the President of the European Commission Ursula von der Leyen affirmed the Allies’ commitment to evacuating EU citizens and Afghan staff, but did not hide their concern regarding their ability to reach Kabul Airport, admitting that the security situation is getting worse by the hour.

Articulating an apparent consensus of the G7, the EU leaders made it clear that Taliban cooperation on the evacuation and the protection of human rights standards were part of the stringent conditionality that the new regime in Kabul should expect.

The President of the European Commission focused on the humanitarian dimension of the crisis at hand, not least the human rights of women and girls:

“3.7 million people have been displaced in Afghanistan. 80% percent are women, girls and children who are most at risk. They urgently need help. She announced that the commission will quadruple the humanitarian aid from the initial budget of 50 million to 200 million for the year 2021.”

Assistance, von der Layen underscored, would be condition-based as it has always been, linked to fundamental human rights, especially woman’s rights. In a written statement, Charles Michel echoed the President of the European Commission, underscoring the point of conditionality and expressing the hope that Europe will continue to have influence on the ground in Afghanistan, conditioning the release of development to the meeting of fundamental human rights benchmarks.

Europe had set one billion euro aside for the next seven years for Afghanistan, but the EU development assistance package has been frozen until sufficient commitments and guarantees are in place, in practice rather than in principle, Michel underscored during the press conference.

The President of the European Commission recognised that Europe needed continuity in responding to sustained needs on the ground such as access to medical facilities, drinking water, sanitation, and food but noted that the current situation has created many new needs.

The President of the European Council called on the Taliban regime to give free passage to the Airport for those who are entitled to evacuation.

The discussion with the Americans and partners focused on the urgency of securing the airport and providing free and fair passage to all those who have the right to be evacuated.

On the question of hosting Afghan refugees, Michel made two points: first, that Europe will do everything necessary to address the living conditions of Afghans who have fled the country, including those reaching Iran, Pakistan and Central Asia.

On this point, von der Leyen recognised the danger for particular groups of people including educated women and girls, female journalists, human rights activists and lawyers. She noted that beyond the EU, the United Kingdom, the United States and Canada also announced significant threshold commitments for resettlement and underscored the need for coordination.

Brussels Morning’s Laliuma Sadid asked the President of the European Council whether support for states neighbouring Afghanistan states to deal with refugees, like Pakistan, could end up seeing the diversion of humanitarian aid to supporting terrorist groups.

Michel’s response was that the G7 group was in consensus over the point that support towards Afghan people should be guaranteed, but the fight against terrorism remains a priority.

In a firm tone, Michel insisted that Europe must not allow smugglers and traffickers of human beings to profit from the current situation and noted with confidence that Europe is ready to manage the migration flow, while also ensuring the protection of its borders.

Furthermore, Michel said that the EU would continue to strive to safeguard the achievements of Afghan citizens on human rights, particularly regarding women and minorities, but would also hold the new regime to account in matters pertaining to security, the fight against terrorism and drug trafficking. On message, the President of the European Commission Ursula von der Leyen actually referred to a “moral duty” to sustained commitment and admitted a “major setback for the international community,” recognising the “tragedy for the Afghan people.”

Looking forward, Michel noted that cooperation between NATO Allies will remain key in that regard, specifically referring to data and intelligence sharing. However, he made an explicit reference to the need for Europe to develop “strategic autonomy,” linking it to lessons learned from the Afghan experience.

Reflecting on the geopolitical implications of unfolding events, Michel even went as far as to argue that this is not the end of Europe’s commitment to promoting rule of law and human rights in Afghanistan or the rest of the world.