by Carlos Zorrinho MEP
in Opinion 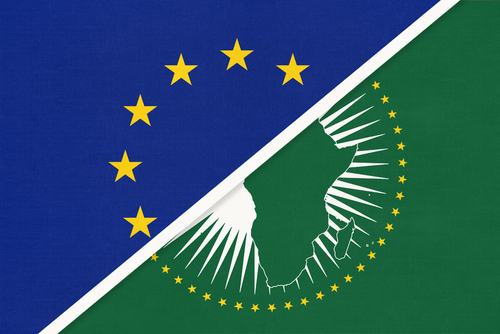 European Union or EU and African Union national flag from textile. Symbol of the assembly of the African continent.

Belgium (Brussels Morning Newspaper) As escalating global tension gets stronger and stronger, intensive diplomatic exchanges seek to prevent the invasion of Ukraine by Russia, reopening a Pandora’s Box on a continent that in the last century was the main stage for two bloody and destructive World Wars.

In this emergency scenario, the European Union-Africa Union Summit takes on an even greater importance. While maintaining its focus on establishing a strong partnership between equals, one that is pragmatic, multilateral, and bent on achieving results for their respective populations’ quality of life as well as the planet’s sustainability, the Summit has to reinforce the role of the two continents as promoters of a global peace based on cooperation, dialogue, tolerance, Rule of Law values and the protection of human rights, democracy, freedom and mutual respect between the major global powers.

In the case of Africa, all the leading powers aspire to assert their economic and political interests on a continent brimming with enormous potential. China and Russia seek to develop and exploit on-the-ground strategic linkages generated by the ties of financial or military dependence.

The European Union, as expressed in a letter from the European Parliament to Heads of Member States. This was signed by the chairs of the Committees on Foreign Affairs, International Trade, Development, Human Rights, Security, and Defence, as well as by the chairs of the Delegation to the ACP-EU Joint Parliamentary Assembly, the Delegation for Relations with the Pan-African Parliament, and that for Relations with South Africa. It prioritises stepping up the EU’s cooperation with the AU and with sub-regional and national partners on the African continent to promote security and development, in order to ensure long-term structural peace and stability.

Promoting security, development, peace and stability in Africa and Europe via a new generation of cooperation transforms the donor-beneficiary dependency relationship into one of interdependence that offers a win-win outcome among equals. It also generates a stronger voice for peace and stability in the world, counterbalancing the growing influence of protectionist and authoritarian currents in the contemporary game of global geopolitical chess.

Both the EU and the AU have the opportunity to serve their peoples and humanity at this crucial and very risky time. They can set an example by developing a cooperation based on values that include the safeguarding of human rights and respect for the Rule of Law, by implementing common policies based on issues such as trade, migration, gender equality, social responsibility, as well as safety and security in the fight against extremism and radicalism.

The pandemic recovery represents a critical test for the credibility and assertiveness of the partnership strategy. We must redress the huge inequalities in access to vaccines and create conditions to ensure that Africa has the capacity not only to vaccinate but also to produce vaccines and other essential supplies for the well-being of its people.

At the same time, it is vital that we attain the requisite sustainable development goals. This is especially true for those goals that focus on combating poverty, creating opportunities for young people and empowering women, if we are to succeed in increasing the potential of both continents to respond to the stimulus of public and private investment deployed to implement the joint strategy.

The EU-AU Strategy involves five specific partnerships in the context of mutual capacity-building. These are the green transition and access to energy, digital transformation, sustainable growth and employment, peace and governance, plus migration and mobility. All are critical to the agendas of the two continents and for the world as whole. The greatest challenge that Europe and Africa face together is to succeed by enhancing a multilateral approach, one of proximity and mutual respect for shared values.  Doing so will represent a great step forward not just for our respective peoples but for the whole of humanity.