EU army warning: Ireland told to get out now as Macron and Merkel plot military wing of EU 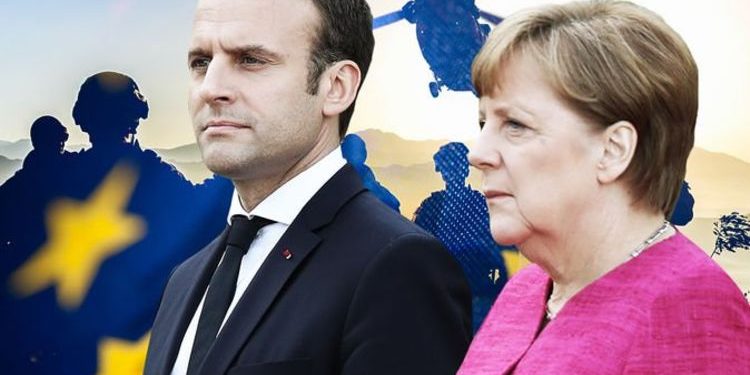 THERE is “growing support” on the continent for an EU army with enthusiastic backing from Germany’s Chancellor Angela Merkel and France’s President Emmanuel Macron, a former top diplomat has claimed.

With the UK no longer a member of the bloc, the push to create a joint military force may be impossible to stop, said Ray Bassett, Ireland‘s former ambassador to Canada, Jamaica and the Bahamas. The warning was sounded by Mr Bassett in the course of his new book, Ireland and the EU Post Brexit, in which he considers Ireland’s place in the bloc after the departure of the UK.

Mr Bassett firmly believes Ireland needs to consider following the UK’s lead by planning for “Irexit”, and during the course of his book, accuses former Irish Taoiseach Leo Varadkar among others of slavishly following the EU’s line in practically every respect – while ignoring warning signs about the bloc’s burgeoning ambitions.

Assessing the EU’s stance, Mr Bassett said Brussels was motivated by a “growing detachment from the United States and resentment at the domination of that country of present military arrangements under NATO”.

He added: “As the US becomes more wary of foreign adventurism, some within the EU want to fill the vacuum left by Uncle Sam.

“To do that, they want a European Army, with a large European industrial-military complex in support.”

In Ireland, where both Mr Varadkar’s Fine Gael and present Taoiseach Micheal Martin are both enthusiastically pro-EU, there was nevertheless a degree of denial, Mr Bassett said.

He explained: “There are many in Ireland who believe that claims of a future European Army are just scare stories.

“Former European Minister Lucinda Creighton even described reports about an EU Army as ‘pathetic’, in the Irish edition of The Sunday Times on May 7, 2019.”

However, he said: “Yet this is completely contrary to the evidence.

“In fact, the proposal to militarise the EU is receiving growing support among establishment figures in mainland Europe.”

Media outlets last year reported the “delight” of former European Commission President Jean-Claude Juncker at the news that both Mr Macron and Mrs Merkel had voiced their support.

Mr Bassett added: “On November 13, Merkel, speaking to the European Parliament, had expressed unambiguously her support for a ‘real, true, European Army’.

“This echoed the strong commitment of Macron for a military wing to the EU.

“Macron had, somewhat farcically, earlier called for a European Army to protect the EU from Russia, China and the US, drawing a sharp rebuke from President Trump.”

Mrs Merkel had returned to the theme during a ceremony to mark a new friendship treaty between France and Germany, signed in Aachen last January.

Mr Bassett said: “She described the Treaty as another step forward towards the creation of a European Army.

“The main opponent of a military arm for the EU has always been the UK.

“Now with the Brits departing, the push for a European Army will be much more difficult to stop.”