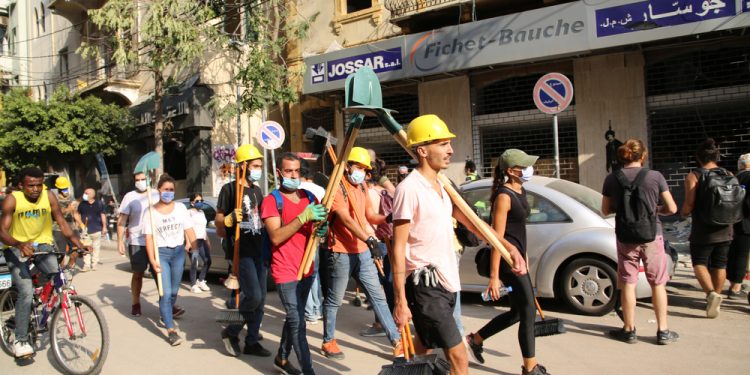 August 6, 2020: Lebanese volunteers band together to clean up and give aid in Beirut Downtown after the tragic explosion happened in Port of Beirut on August 4, 2020 - Beirut Lebanon

Brussels (Brussels Morning) EU approves additional aid for Lebanon of some 100 million euro, to be used for cushioning the blow of the August explosion at the Port of Beirut and supporting recovery, according to EU Commission’s press release on Wednesday.

Olivér Várhelyi, EU Commissioner for Neighbourhood and Enlargement, notes the bloc is supporting the Lebanese people affected by the explosion, which is still under investigation. He stresses that people in Beirut feel the consequences of the blast “in addition to political and socio-economic crisis as well as the COVID-19 pandemic.”

The EU still expects Lebanon to form a government quickly, Várhelyi points out and stresses the importance of implementing reforms to facilitate a broader recovery. He notes the money should be used to provide access to social protection and basic services to the people.

The aid package comprises 64.5 million euro for refugees and the most vulnerable Lebanese via the EU Regional Trust Fund in Response to the Syrian Crisis, focused on social and health assistance as well as support for small businesses.

The remaining 34 million will be redirected from the 2020 bilateral funding agreement under the European Neighbourhood Instrument and will go towards improving governance and accountability, supporting civil society and providing economic opportunities.

A portion of the package is earmarked for restoring basic services and rebuilding infrastructure damaged by the explosion.

Josep Borrell, High Representative of the EU for Foreign Affairs and Security Policy, and EU Council President Charles Michel advanced this support at the conference on Lebanon hosted by France and the UN on 2 December.

The EU provided emergency aid of 70 million euro to Lebanon following the 4 August explosion and remains at the forefront of efforts to support the country after the blast. The EU Commission points out that continued aid demonstrates the bloc’s solidarity with Lebanon as a refugee hosting country.

The bloc, the World Bank and the UN jointly developed an aid plan aimed at helping Lebanon get back on its feet. The framework was launched on 4 December in Beirut and focuses on immediate humanitarian aid as well as medium-term recovery