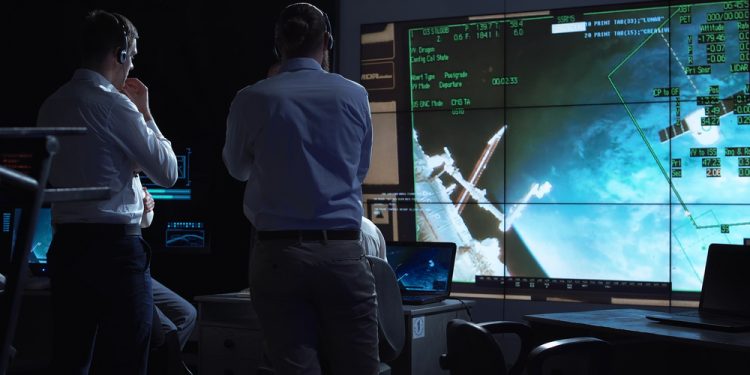 A group of people are controlling the orbiting international space station ISS. Elements of this image furnished by NASA

On Thursday, the ESA noted it was signing the deal with the Swiss ClearSpace start-up, which intends to launch a satellite capable of clearing space debris from the Earth’s orbit by 2025. Thousands of orbiting defunct satellites and other discarded space junk pose threats to future space launches, to functioning satellites and to the International Space Station (ISS).

ESA Director General Johann-Dietrich Wörner stressed the importance of removing space junk left in orbit at the end of 2019, when he first announced the clean-up mission. ClearSpace founder and CEO Luc Piguet warned that the problem of space litter would continue to grow, jeopardising hundreds of planned satellite launches in the coming years.

He said a solution was becoming more and more necessary as the region around the planet becomes increasingly congested with failed satellites in low Earth orbit.

The ClearSpace-1 mission hopes to launch a spacecraft that will rendezvous with a discarded rocket fragment weighing some 112 kilograms that remains in orbit from a 2013 satellite launch.

Then, having locked on to the fragment, the satellite would break the orbit trajectory and drag the fragment away with until they both burned up on re-entering the Earth’s atmosphere.

The ESA states that follow-up missions will seek to clean up more challenging items of debris, sometimes more than one piece at a time.

Entering a commercial arrangement with ClearSpace rather than developing a solution of its own marks a new departure and a new business model for ESA. The space agency notes, however, that it will provide key expertise in developing the project.

Besides providing help with expertise and financing for the first mission, ESA points out that the venture should help ClearSpace get on its feet in the coming period with the added interest of commercial investors.

The space fragment, dubbed Vespa, has remained in orbit at an altitude of between 660 and 800 kilometres, endangering working satellites and the ISS, RFI reports. It is one of about 20,000 pieces of space junk currently being monitored for possible collisions as they orbit at speeds exceeding 28,000 kilometres per hour, posing an ever-present and serious threat.