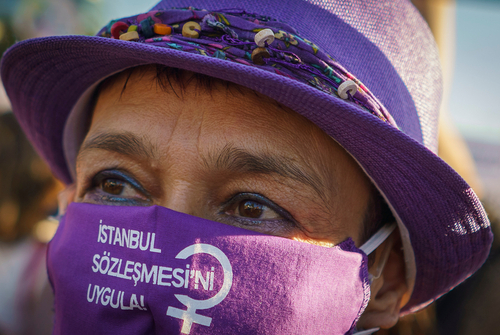 A woman wearing protective masks with a sign reading: "Implement Istanbul Convention!", take part in a protest against femicide and domestic violence, in Istanbul, Turkey August 5, 2020

Brussels (Brussels Morning) Thousands of Turks took to the streets in protest on Saturday, after President Recep Tayyip Erdoğan decreed that the country will withdraw from the Istanbul Convention, despite the Turkish parliament having already ratified the treaty with unanimous support, AP reports.

The international treaty, formally named the Council of Europe Convention on Preventing and Combating Violence Against Women and Domestic Violence, is a human rights document approved by the foreign ministers of Council of Europe countries when they met in Istanbul in 2011. Turkey was the first country to sign and to ratify the agreement.

Erdoğan’s hardline supporters within the ruling right-wing AKP party began asserting last year that the Convention encourages “immoral lifestyles” such as homosexuality and that it threatens the “holiness” of the marital bonds. Erdoğan’s is seen as having capitulated to the party hardliners by declaring that Turkey will be withdrawing from the treaty on Friday.

According to women’s rights groups, Turkish authorities mostly ignored the legal norms of the Convention in any case, failing to provide the mandated assistance and protective measures for women and victims of domestic violence.

At least 38% of Turkish women are subject to domestic violence, according to data collected by the World Health Organisation. A total of 77 women have been killed in Turkey since the start of this year. Last year, 409 were killed in total, according to the We Will Stop Femicide Platform, which noted that dozens of women found dead under suspicious circumstances were not included among those statistics.

Council of Europe Secretary-General Marija Pejčinović Burić called Erdoğan’s decision “devastating”. She described the move as “a huge setback to these efforts and all the more deplorable because it compromises the protection of women in Turkey, across Europe and beyond”.

EC High Representative Josep Borrell expressed deep regret and “incomprehension” about the decision and urged its reversal. “This decision risks compromising the protection and fundamental rights of women and girls in Turkey”, he said. “It also sends a dangerous message across the world”, he declared.

Thousands of Turks joined mass protests on Saturday, with hundreds gathering in Istanbul, wearing masks and holding banners. Many cheered as a woman using a megaphone told the authorities: “You cannot close up millions of women in their homes. You cannot erase them from the streets and the squares”.

Some legal experts expressed doubts that the President has the authority to withdraw from an international treaty once it has been ratified by the parliament, arguing that the move would need the parliament’s blessing. Under Turkey’s Constitution, ratified international agreements have the force of law. Writing on Twitter, the country’s Justice Minister dismissed the argument, maintaining that the executive has the authority to withdraw.