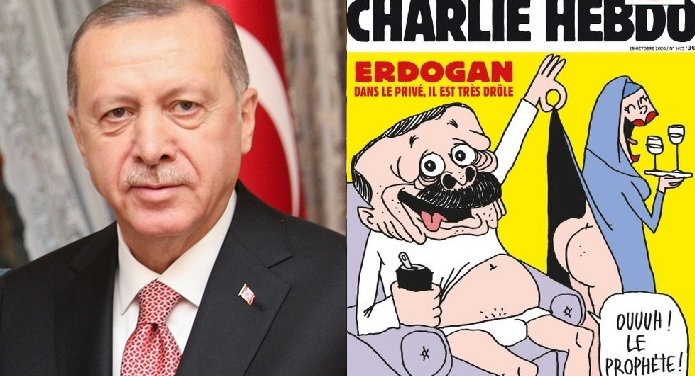 Erdoğan’s head of media and communications Fahrettin Altun accused the French weekly publication of spreading hatred, adding that President Emmanuel Macron has an anti-Muslim agenda, which is bearing fruit. Altun dismissed the cartoon as despicable and disgusting.

The weekly released the front-page cartoon of Erdoğan at a time when the war of words between the Turkish President and the EU has been escalating in the aftermath of the beheading of French teacher Samuel Paty. Macron has taken a firm stance in defence of France’s secular tradition and its commitment to freedom of expression, which includes the right to satirize and offend. Macron’s defence of freedoms and his recent remarks about Islam being in the grips of a worldwide crisis have sparked a wave of anti-French protests and calls for a boycott of French products across Muslim-majority countries.

Tuesday also saw the Netherlands Prime Minister Mark Rutte come to the defence of opposition politician Geert Wilders after Erdoğan sued him for sharing a cartoon. Rutte said he had a simple message for Erdoğan — that the principle of freedom of expression is highly valued in the Netherlands.

Erdoğan has a history of trying to silence critics in Europe with lawsuits, having brought a case against German comic Jan Böhmermann in 2016 over a poem he cliamed was deliberately defamatory about him.

The Turkish state-run Anadolu Agency noted that Erdoğan filed a criminal complaint against Wilders on Tuesday for “insulting the president,” a crime in Turkey that is punishable by up to four years in prison, AP reports. Erdoğan has been suing people for alleged insults since he took office in 2014. Thousands have been convicted and, according to the Turkish daily BirGün, more than 29,000 people were prosecuted last year alone on charges of insulting the president.

Yesterday, Tuesday, the European Court for Human Rights (ECHR) ruled that Turkey violated free speech rights of Turkish opposition politician Kemal Kılıçdaroğlu eight years ago, France24 reported. The ECHR recalled that Turkish courts had found Kılıçdaroğlu guilty of slander for criticising then Prime Minister Erdoğan over a Turkish Air Force bombing and a controversial hydroelectric dam in 2012. Turkey, although not an EU member state, comes under the jurisdiction of the ECHR as a Council of Europe member.