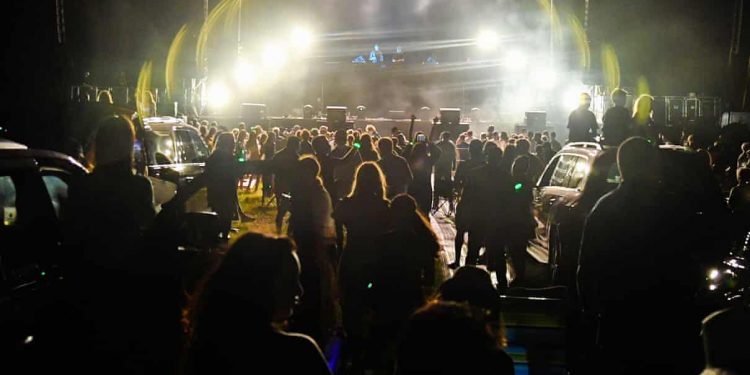 The drive-in event, Safe & Sound, had space for about 600 cars and was held in Southampton village on Saturday. It was the first in a series of concerts planned for the US, according to the organisers’ website.

Southampton’s mayor, Jesse Warren, hosted the event. Solomon, a part-time DJ who goes by the name D-Sol, performed for an hour at a 100-acre sculpture park. “The group that put this together did an incredible job in a difficult environment,” he told Bloomberg News.

However, the New York governor condemned the gig.

“Videos from a concert held in Southampton on Saturday show egregious social distancing violations,” Cuomo tweeted. “I am appalled.”

Organisers said they collaborated with state and local health officials and followed Centers for Disease Control and Prevention guidelines. A statement said organisers “made best efforts to ensure New York’s social distancing guidelines were properly maintained throughout the event”.

For Solomon, the opportunity to work the decks came less than 24 hours after the bank said it had agreed to pay the Malaysian government $3.9bn over charges stemming from the 1MDB scandal.

According to the East Hampton Star, the New York state health department has opened an investigation and sent a letter to the town supervisor, Jay Schneiderman, whose own band performed at an event billed as an opportunity to “enjoy life to the fullest without having to compromise everything”.

The state health commissioner, Howard Zucker, wrote that he was “greatly disturbed” by reports of an event “which apparently involved thousands of people in close proximity, out of their vehicles, a VIP area where there was no pretense of a vehicle, and generally not adhering to social distancing guidance”.

The Hamptons, a summer enclave for wealthy New Yorkers, has become a hideout from a metropolis ravaged by Covid-19, with tens of thousands decamping to second homes and pricey rental properties.

Hoping to reinforce an exclusion zone in an area already effectively access-limited by wealth, some residents have tried to enforce social controls by insisting guests come equipped with recent Covid-19 tests.

Reports from an event described as “super swanky” by the celebrity news website TMZ, with top-price tickets going for as much as $25,000 and profits going to local charities, suggested attempts to impose social distancing had clearly failed.

“What kind of business model is killing all your supporters?” wondered one Twitter user.

“The Chainsmokers paving the way for 3,000 new hospitalizations. This is straight up irresponsible,” said another.

The Hamptons has been hit by recent protests over inequality. Earlier this month, a caravan of 200 protesters – some reportedly wielding plastic pitchforks – descended on the area to demand Cuomo raise taxes on New York state’s 118 billionaires.